Akka in Action: why use clustering?

Save 37% on Akka in Action. Just enter code fccroestenburg into the discount code box at checkout at manning.com.

A cluster is a dynamic group of nodes. On each node is an actor system that listens on the network. Clusters build on top of the akka-remote module. Clustering takes location transparency to the next level. The actor might exist locally or remotely and could reside anywhere in the cluster; your code doesn’t have to concern itself with this. Figure 1 shows a cluster of four nodes. 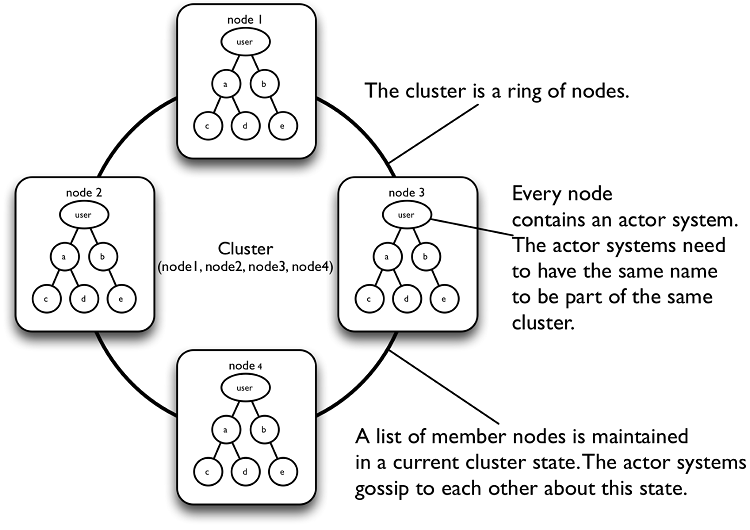 Although these features don’t provide everything we need for a fully location-transparent cluster (like automatic rebalancing, repartitioning, and replication of state), they do provide the means to scale applications dynamically. You can be sure you’ll find features for most of these missing items in future versions of Akka or as part of extensions contributed to Akka. A single-purpose data processing application is a good example of a candidate application for using clusters right now, for instance, data processing tasks like image recognition or real-time analysis of social media that can be beneficial to companies that provide growth services like you could find at https://growthoid.com/ampfluence-alternative/ or likewise. when they’re wanting to keep track of number increases, etc. Nodes can be added or removed when more or less processing power is required. Processing jobs are supervised: if an actor fails, the job is restarted and retried on the cluster until it succeeds. Figure 2 shows an overview for this type of application. 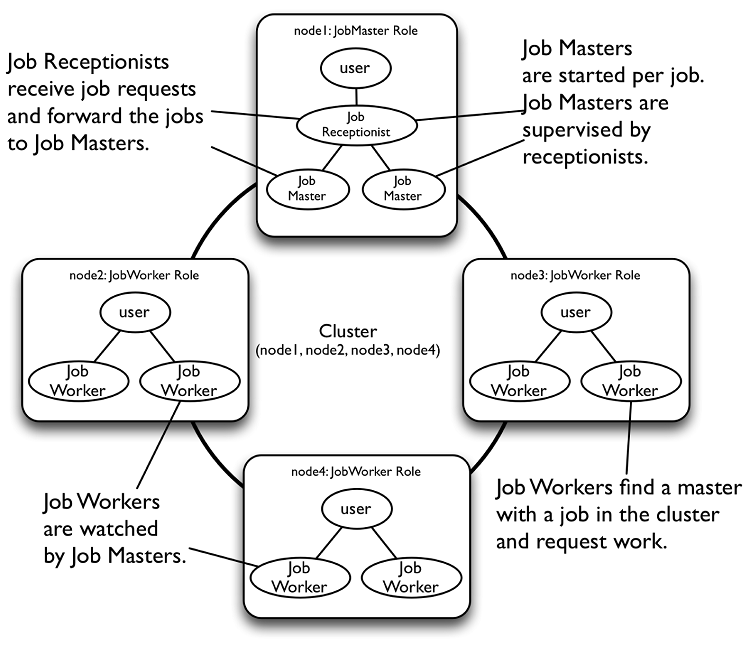 Let’s move on to writing the code to compile our clustered word count application. In the next section, we’ll dig into the details of cluster membership so that the job masters and workers can find each other to work together.

We will start with the creation of the cluster. The processing cluster will consist of job master and worker nodes. Figure 3 shows the cluster that we are going to build.

The job master nodes control and supervise the completion of word-counting jobs. The job workers request work from a job master, process parts of the text, and return the partial results to the master. The job master reports the result once all word counting has been done. A job is repeated if any master or worker node fails during the process. Figure 3 also shows another type of node that will be required in the cluster, namely seed nodes. The seed nodes are essential for starting the cluster. In the next section we’ll look at how nodes become seed nodes, and how they can join and leave the cluster. We’ll look at the details of how a cluster is formed and experiment with joining and leaving a simple cluster using the REPL console.

Like with any kind of group you need a couple of “founders” to start off the process. Akka provides a seed node feature for this purpose. Seed nodes are both the starting point for the cluster, and they serve as the first point of contact for other nodes. Nodes join the cluster by sending a join message which contains the unique address of the node that joins. The Cluster module takes care of sending this message to one of the registered seed nodes. It’s not required for a node to contain any actors, so it is possible to use pure seed nodes. Figure 4 shows how a first seed node initializes a cluster and how other nodes join the cluster. 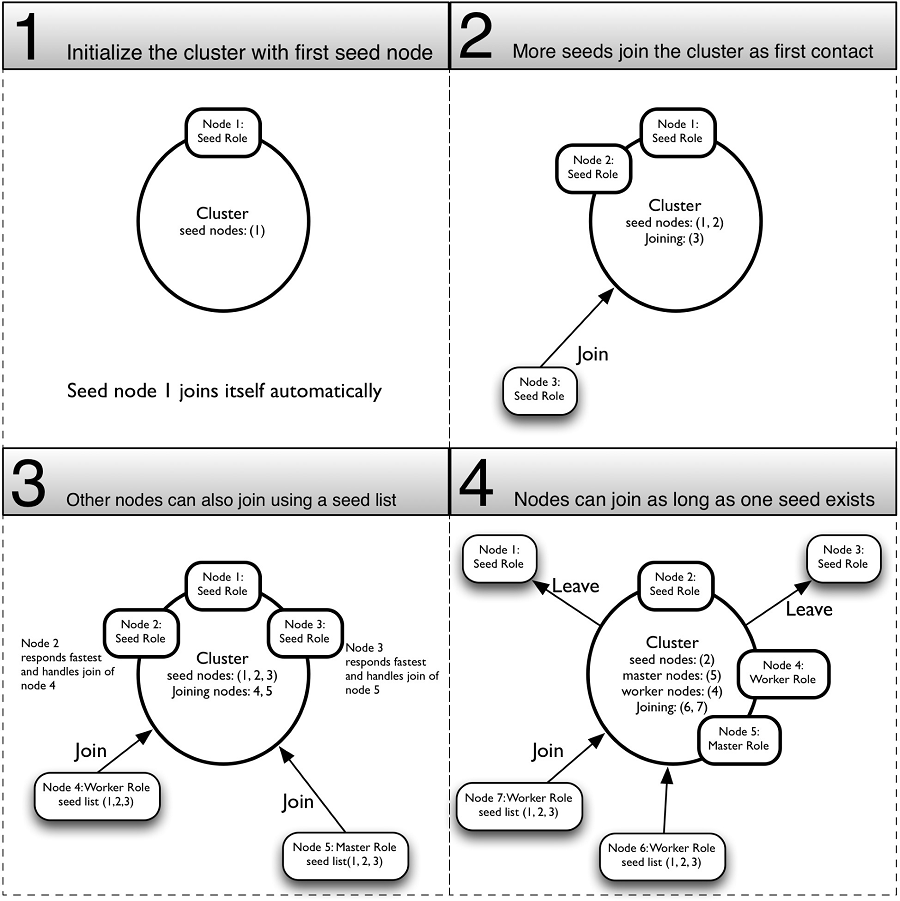 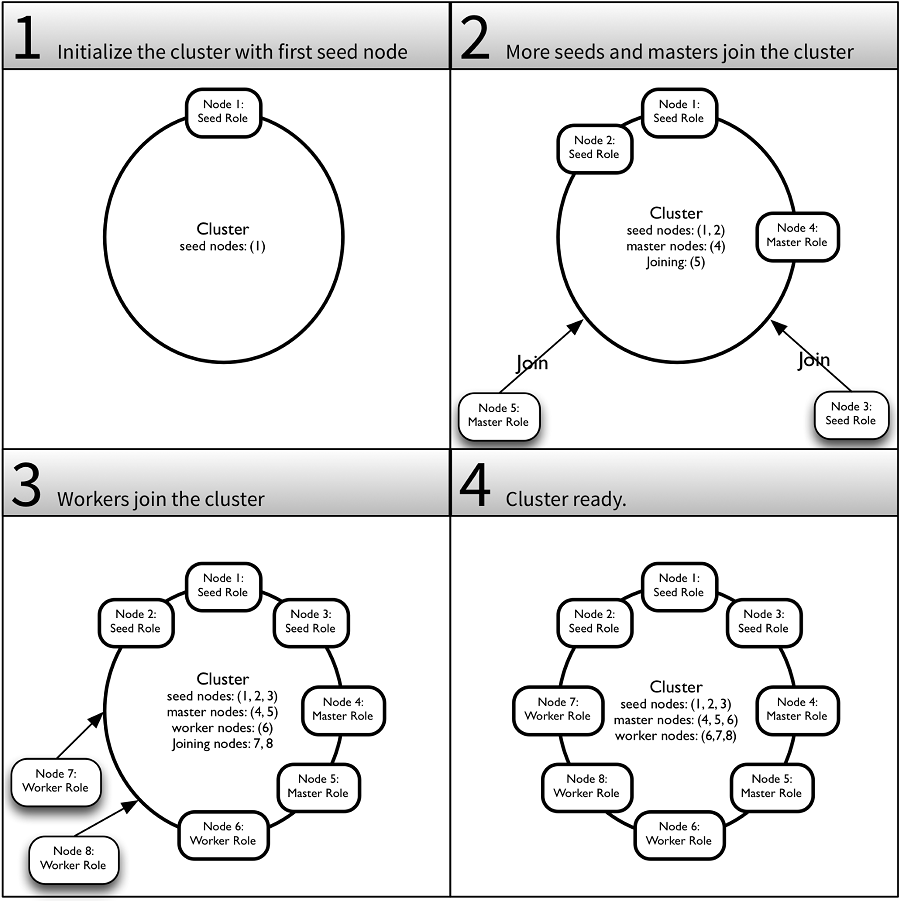 Let’s start by creating seed nodes using the REPL console, which will give more insight into how a cluster is formed. To be clear, you wouldn’t go through these steps manually once you actually deploy a clustered application. Depending on your environment, it’s most likely that assigning addresses and starting the seed nodes in the cluster is part of provisioning and deployment scripts. A node first needs to be configured to use the cluster module. The akka-cluster dependency needs to be added to the build file as shown:

? The build file defines a val for the version of Akka

Listing 1 shows a minimal configuration for the seed nodes (which can be found in src/main/resources/seed.conf).

Listing 1, “Configuring the seed nodes” shows a minimal configuration for the seed nodes (which can be found in src/main/resources/seed.conf).

? Remote configuration for this seed node.

? The seed nodes of the cluster.

? The seed node is given a seed role to differentiate from workers and masters.

? The minimum members of every role for the cluster to be deemed to be “up.” In the case of the seed nodes, the cluster should be up once there is at least one seed node up.

We’ll start all the nodes locally throughout these examples. If you want to test this on a network, just replace the -DHOST and -DPORT with the appropriate hostname and port respectively, which sets the environment variables HOST and PORT. The seed.conf file is set up to use these environment values as overrides if they’re available. Start sbt in three terminals using different ports, inside the chapter-cluster directory. sbt is started for the first seed node as shown:

Do the same for the other two terminals, changing the -DPORT to 2552 and 2553. Every node in the same cluster needs to have the same actor system name (words in the previous example). Switch to the first terminal, in which we’ll start the first seed node.

The first node in the seed nodes must automatically start and form the cluster. Let’s verify that in a REPL session. Start the console in sbt (by typing console at the sbt prompt) in the first terminal started with port 2551, and follow along with listing 2.

Listing 2. Starting up a seed node

? Load the configuration for the seed node, found in the file src/main/resources/seed.conf

? Remote and cluster modules are automatically started. The console output is simplified to show the most relevant messages.

? The cluster name is the same as the name of the actor system.

? The words cluster seed node has automatically joined the cluster.

Start the console on the other two terminals and paste in the same code as in listing 2 to start seed node 2 and 3. The seeds will listen on the port that we provided as -DPORT when we started sbt. Figure 7 shows the result of the REPL commands for seed nodes 2 and 3. 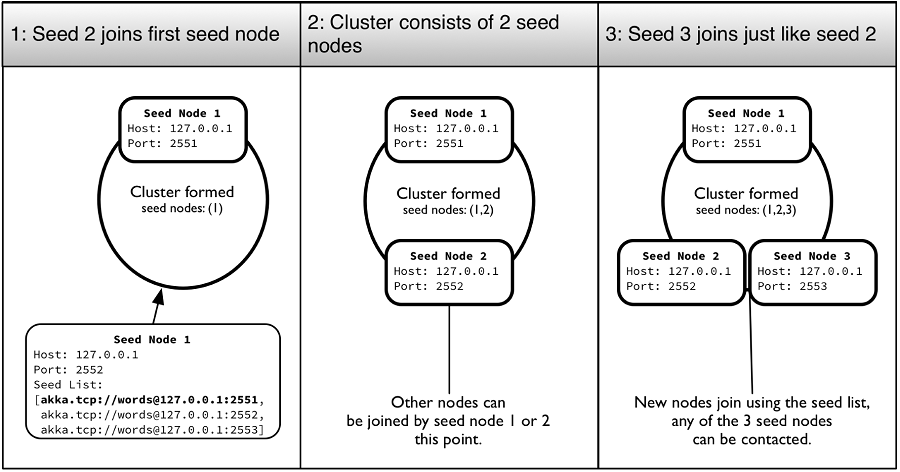 You should see something similar to listing 3, “Seed node 3 confirming joining the cluster” in the other two terminals, confirming that the nodes joined the cluster.

? Output formatted for readability; will show as one line in the terminal

? Output abbreviated and formatted for readability.

? The first seed node joins itself and becomes the leader.

One of the nodes in the cluster takes on special responsibilities; to be the leader of the cluster. The leader decides if a member node is up or down. In this case the first seed node is the leader.

Only one node can be leader at any point in time. Any node of the clusters can become the leader. Seed nodes 2 and 3 both request to join the cluster, which puts them in the Joining state. The leader moves the nodes to the Up state, making them part of the cluster. All three seed nodes have now successfully joined the cluster.