Take 37% off Modern Fortran. Just enter code fcccurcic into the discount box at checkout at manning.com.

Part 3: Identifying risky stocks and when to buy and sell

This article is Part 3 of a sequence on analyzing stock price time series with Fortran arrays.

In Part 1, I explained how to declare and initialize dynamic Fortran arrays. I also showed how to use the so-called array constructors to conveniently allocate and initialize an array in a single line of code. In Part 2, we went into more detail on explicit allocation and deallocation of Fortran arrays, which gives you finer control such as using custom index ranges for your arrays. Explicit allocation also comes with built-in exception handling, allowing you to write more robust and fault-tolerant code. You also learned how to slice arrays with arbitrary range and stride. If you haven’t yet read the first two parts, I recommend you go back and do that before moving on. In the third and final part, we’ll use built-in functions and whole-array arithmetic to calculate some interesting metrics such as moving average and standard deviation. We’ll use these to tackle the remaining two stock price analysis challenges – identifying risky stocks, and finding good times to buy and sell. 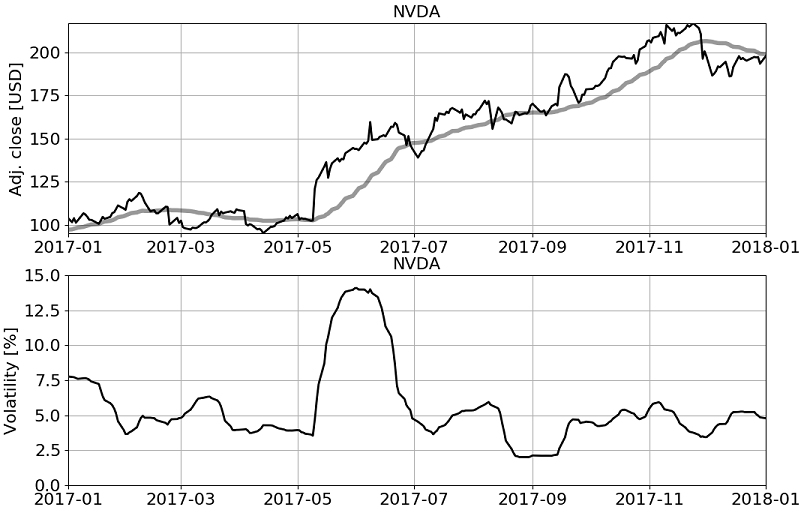 While the Fortran standard library comes with many mathematical functions out of the box, it doesn’t include a function to compute the average of an array. However, it is fairly straightforward to implement using intrinsic functions sum and size:

To calculate the standard deviation of an array x, we can follow these steps:

Here’s the complete code for the standard deviation function. Thanks to the Fortran whole-array arithmetic, we can express all 5 steps as a one-liner:

To use arithmetic operators on whole arrays, the arrays on either side of the operator must be of the same shape and size. You can also combine an array of any shape and size with a scalar. For example, if a is an array, 2 * a will be applied element-wise, that is, each element of a will be doubled.

However, we are not done here. Rather than just the average and standard deviation of the whole time series, we are curious about these metrics that are relevant to a specific time, and we want to be able to see how they evolve. For this we can use the average and standard deviation along a moving time window. A commonly used metric in finance is the so-called simple moving average, which takes an average of some number of previous points, moving in time. I will let you tackle this one, and will meet you on the other side of this exercise.

Our current implementations for average and standard deviation are great but they don’t let us specify a narrow time period that would give us more useful information about stock volatility at a certain time. Let’s write a function moving_average that takes an input real array x and integer window w, and returns an array that has the same size as x, but with each element being an average of w previous elements of x. For example, for w = 10, the moving average at element i would be the average of x(i-10:i). In finance, this is often referred to as the simple moving average.

We can use the intrinsic function max to limit the indices near the edges of x to prevent going out of bounds. For example, max(i, 1) results in i if greater than 1, and 1 otherwise. We’ll also need to use a combination of looping and whole-array arithmetic to implement the solution.

The moving average can be implemented by iterating over each element of the input array, slicing that array over a sub-range determined by the input window parameter, and applying the general average function to that slice:

Notice that inside the loop, I use the intrinsic functions min and max to limit the sub-range from exceeding the bounds of the array x. For a standard deviation function over an equivalent window, we’d just replace average(x(i1:i)) with std(x(i1:i)). You can find these functions in stock-prices/src/mod_arrays.f90.

The main program of this challenge is very similar to the previous one (stock_gain). However, besides printing the total time series average and volatility on the screen, now we also write the 30-day moving average and standard deviation into text files:

Can we use historical stock market data to learn some techniques that could help us determine a good time to buy or sell a certain stock? One of the commonly used indicators by traders is the so-called moving average crossover. Consider that the simple moving average is general indicator of whether the stock is going up or down. For example, a 30-day simple moving average would tell you about the overall stock price trend. You can think of it of a smoother and delayed stock price, without the high frequency fluctuations. Combined with the actual stock price, we can use this information to decide whether we should buy or sell, or do nothing – see Figure 4.

Figure 2: Moving average crossover indicators for Apple. Black is the adjusted daily closing price, grey is the 30-day simple moving average, and up and down arrows are the positive and negative crossover markers, respectively.

Let’s see how we can employ Fortran arrays and arithmetic to compute the moving average crossover. The calculation will consist of two steps:

Compute the moving average over some time period. It can be any period of time, depending on the trends that you are interested in (intra-day, short term, long term, etc.), and the frequency of the data that you have. We are working with daily data so we’ll work with a 30-day moving average. We’ve already implemented the moving_average function in the previous section, and you can find it in stock-prices/src/mod_arrays.f90.

To implement this calculation, we’ll use almost all array features that we have learned about in this article so far: assumed-size and dynamic array declaration, array constructor, and invoking a custom array function (moving_average). Further, we’ll also create logical (Boolean) arrays to handle the conditions I described in Figure 5. Finally we’ll employ an intrinsic function pack to select only those indices that satisfy our criteria.

All this can be written in about a dozen lines of code:

We first initialize our result array res as an integer sequence from 2 to size(x). This is our first guess from which we’ll subset only those elements that satisfy our criteria. The crux is in the last executable line where we invoke the pack function. How does pack work? When you have an array x that you want to subset according to some condition mask, invoking pack(x, mask) will as a result return only those elements of x where mask is true. mask doesn’t have to be a logical array variable – it can be an expression as well, which is how we used it in our function above. Recall the automatic re-allocation on assignment from Part 2? This is exactly where it comes in super handy – we pass the original array res and a conditional mask to pack(), and it returns a smaller, re-allocated array res according to the mask.

This function only returns the crossover from low to high value, thus named crosspos. However, we also need the crossover from high to low, so that we know when the stock price is going to drop below the moving average curve. How would we implement the negative variant of the crossover function, crossneg? We can reuse all the code from crosspos, except for the last criterion – we need to look for elements that are going from higher to lower, instead of lower to higher:

The main program will use these functions to find the indices from the time series, and write the matching timestamps into files:

I have included only the relevant new code in this listing. The full program is located in stock-prices/src/stock_crossover.f90. The program itself doesn’t do much new stuff. For each stock, it invokes the moving average crossover functions and stores the results into arrays (buy and sell), and writes the timestamps with these indices into a text file. I have plotted the results for Apple (AAPL) for 2017 in Figure 5. You can use the included Python scripts to plot the results for other stocks and other times.

Both the second and third challenge in this article produce results that I plotted and showed above. The Python plotting scripts that I used are included in the stock-prices/plotting directory. Follow the directions in README.md to set up your own Python plotting environment. If you decide to further explore the stock prices data, you can use and modify these scripts for your own application.

And that’s it, we’ve made it! Following only a few rules for array declaration, initialization, indexing, and slicing, we have written a nifty little stock analysis app that tells us some quite useful things about the longer term trends and risk of individual stock prices. The skills that you’ve learned in this article form a foundation for learning parallel Fortran programming with coarrays.

In this article you learned how to:

I covered some of the most powerful features of Fortran arrays. First, we went over the detailed workings of allocating and deallocating dynamic arrays. The exception handling that comes built into these features will help you write more robust and fault-tolerant apps. We then covered all the ways to index and slice arrays to select only those elements that we need. Slicing in particular showed to be useful when computing the moving average for estimating stock volatility and finding good times to buy or sell shares of a stock. However, always be careful not to go out-of-bounds when referencing Fortran arrays! This can often go unnoticed by the compiler, and can result in those pesky segmentation faults that are so difficult to debug, or worse, corrupted data without warning.

You may have noticed that even though the data we used in this article had several different variables, including daily high and low prices and number of shares traded, I only used the time stamps and the adjusted close price. For our exercise that was enough, but if you’re interested in doing more, I encourage you to explore other variables in the dataset. The read_stock subroutine is already written to parse all the other variables, so you can take it from there. Let me know if you expand this into a more full-fledged stock analysis app – I would love to hear more about it!

Enter in the Promotional Code box when you check out.