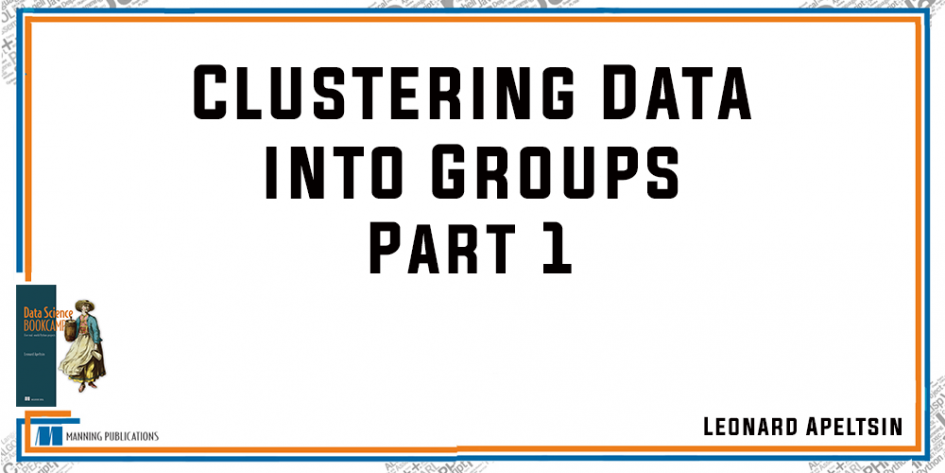 Take 35% off Data Science Bookcamp by entering fccapeltsin into the discount code box at checkout at manning.com.

Imagine that we’re asked to cluster a collection of pet photos. Do we cluster fish and lizards in one group and fluffy pets (such as hamsters, cats, and dogs) in another? Or should hamsters, cats, and dogs be assigned three separate clusters of their own? If so, perhaps we should consider clustering pets by breed. Thus, Chihuahuas and Great Danes fall into diverging clusters. Differentiating between dog breeds will not be easy. However, we can easily distinguish between Chihuahuas and Great Danes based on breed size. Maybe we should compromise: we’ll cluster on both fluffiness and size, thus bypassing the distinction between the Cairn Terrier and the similar-looking Norwich Terrier.

Is the compromise worth it? It depends on our data science task. Suppose we work for a pet food company, and our aim is to estimate demand for dog food, cat food, and lizard food. Under these conditions, we must distinguish between fluffy dogs, fluffy cats, and scaly lizards. However, we won’t need to resolve differences between separate dog breeds. Alternatively, imagine an analyst at a vet’s office who’s trying to group pet patients by their breed. This second task requires a much more granular level of group resolution.

The centrality of data can be represented using the mean. Imagine that you have computed the mean length of two groups of fish, and compared them by analyzing the difference between their means. We can utilize that difference to determine whether all the fish belong to the same group. Intuitively, all data points in a single group should cluster around one central value. Meanwhile, the measurements in two divergent groups should cluster around two different means. Thus, we can utilize centrality to distinguish between two divergent groups. Let’s explore this notion in concrete detail.

Suppose we take a field trip to a lively local pub and see two dartboards hanging side by side. Each of the dartboards is covered in darts, and darts also protrude from the walls. The tipsy players in the pub aim for the bull’s-eye of one board or the other. Frequently, they miss, which leads to the observed scattering of darts centered around the two bull’s-eyes.

Suppose the first bull’s-eye is located at coordinate [0, 0]. A dart is thrown at that coordinate. We’ll model the x- and y-positions of the dart using two normal distributions. These distributions share a mean of 0, and we also assume that they share a variance of 2. The following code generates the random coordinates of the dart.

Listing 2 includes a nested five-line for loop beginning with for _ in range(5000). It’s possible to use NumPy to execute this loop in just one line of code: running x_coordinates, y_coordinates = np.random.multivariate_normal(bulls_eye, np.diag(2 * [variance]), 5000).T returns 5,000 x-and y-coordinates sampled from the multivariate normal distribution. 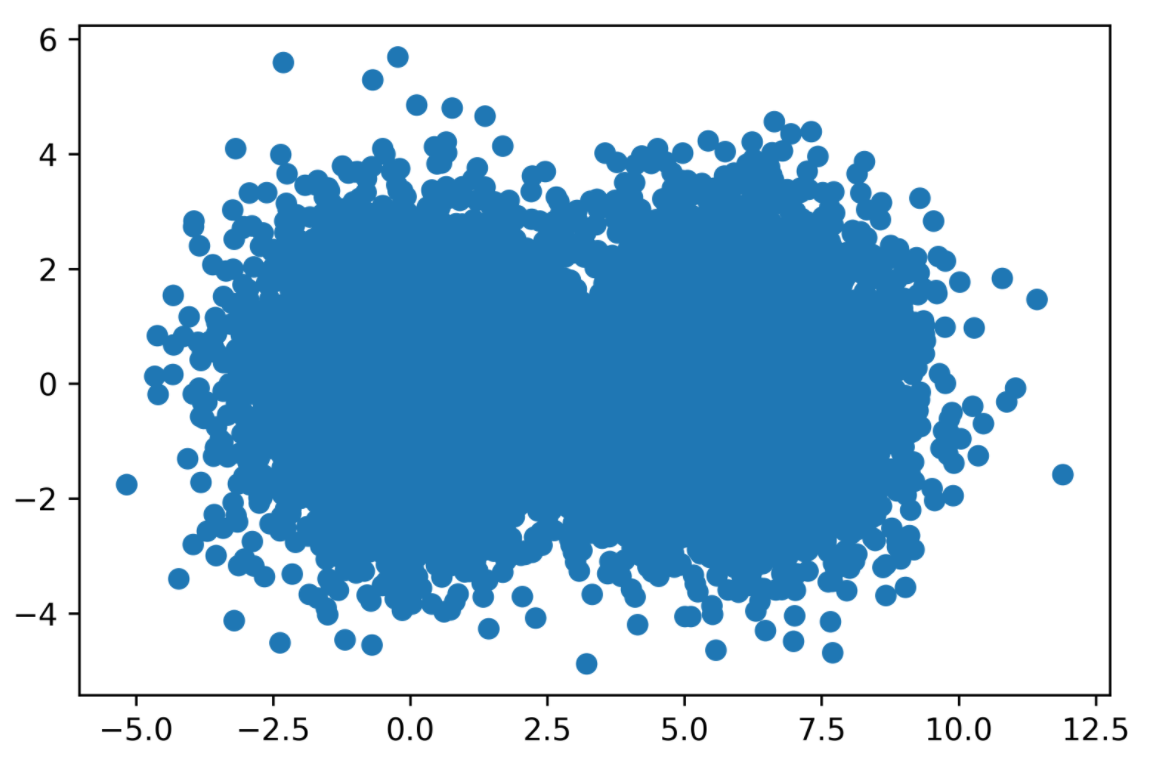 Two overlapping dart groups appear in the plot. The two groups represent 10,000 darts. Half the darts were aimed at the bull’s-eye on the left, and the rest were aimed toward the right. Each dart has an intended target, which we can estimate by looking at the plot. Darts closer to [0, 0] were probably aimed at the bull’s-eye on the left. We’ll incorporate this assumption into our dart plot.

Let’s assign each dart to its nearest bull’s-eye. We start by defining a nearest_bulls_eye function that takes as input a dart list holding a dart’s x- and y-positions. The function returns the index of the bull’s-eye that is most proximate to dart. We measure dart proximity using Euclidean distance, which is the standard straight-line distance between two points.

Euclidean distance arises from the Pythagorean theorem. Suppose we examine a dart at position [x_dart, y_dart] relative to a bull’s-eye at position [x_bull, y_bull]. According to the Pythagorean theorem, distance2 = (x_dart - x_bull)2 + (y_dart - y_bull)2. We can solve for distance using a custom Euclidean function. Alternatively, we can use the scipy.spatial.distance.euclidean function provided by SciPy.

Now we apply nearest_bulls_eye to all our computed dart coordinates. Each dart point is plotted using one of two colors to distinguish between the two bull’s-eye assignments (figure 10.2).

Listing 4. Coloring darts based on the nearest bull’s-eye

❶ Helper function that plots the colored elements of an inputted darts list. Each dart in darts serves as input for nearest_bulls_eye.

❷ Selects the darts most proximate to bulls_eyes[bs_index]

❸ Separates the x- and y-coordinates of each dart by transposing an array of selected darts. The transpose swaps the row and column positions with a 2D data structure.

❹ Combines the separate coordinates of each dart into a single list of x- and y-coordinates. 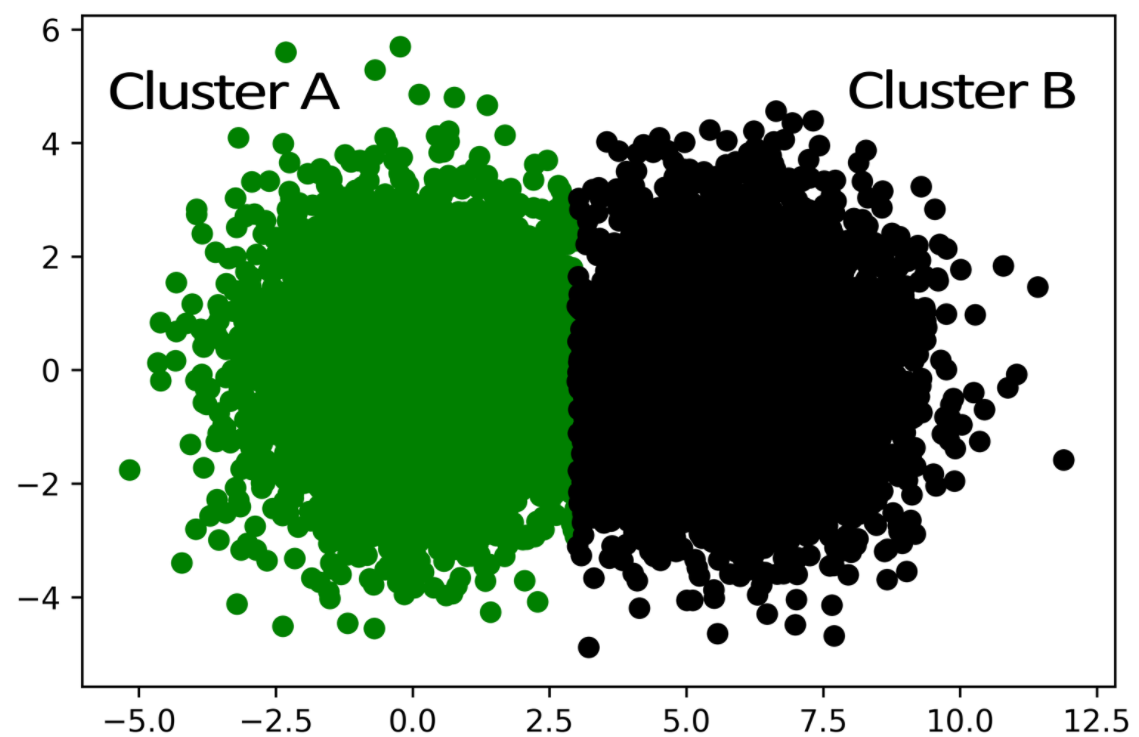 The colored darts split sensibly into two even clusters. How would we identify such clusters if no central coordinates were provided? Well, one primitive strategy is to simply guess the location of the bull’s-eyes. We can pick two random darts and hope these darts are somehow relatively close to each of the bull’s-eyes, although the likelihood of that happening is incredibly low. In most cases, coloring darts based on two randomly chosen centers will not yield good results (figure 3). 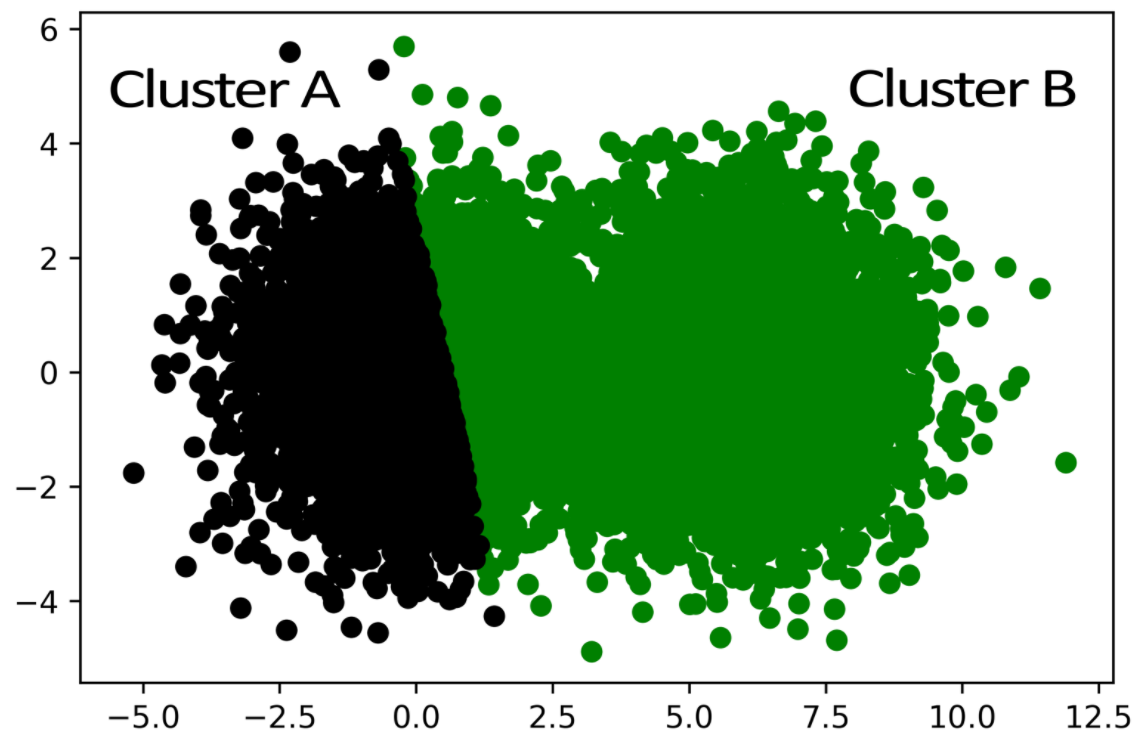 Figure 3. Darts colored based on proximity to randomly selected centers. Cluster B is stretched too far to the left.

Our indiscriminately chosen centers feel wrong qualitatively. For instance, cluster B on the right seems to be stretching way too far to the left. The arbitrary center we’ve assigned doesn’t appear to match its actual bull’s-eye point. But there’s a way to remedy our error: we can compute the mean coordinates of all the points in the stretched right clustered group and then utilize these coordinates to adjust our estimation of the group’s center. After assigning the cluster’s mean coordinates to the bull’s-eye, we can reapply our distance-based grouping technique to adjust the rightmost cluster’s boundaries. In fact, for maximum effectiveness, we will also reset the leftmost cluster’s center to its mean prior to re-running our centrality-based clustering (figure 10.4).

Listing 6. Assigning darts to centers based on means

❶ Takes the mean of the x- and y coordinates for all the darts assigned to a given bull’s-eye. These average coordinates are then used to update our estimated bull’s-eye position. We can more efficiently run this calculation by executing np.mean(selected_darts, axis=0). 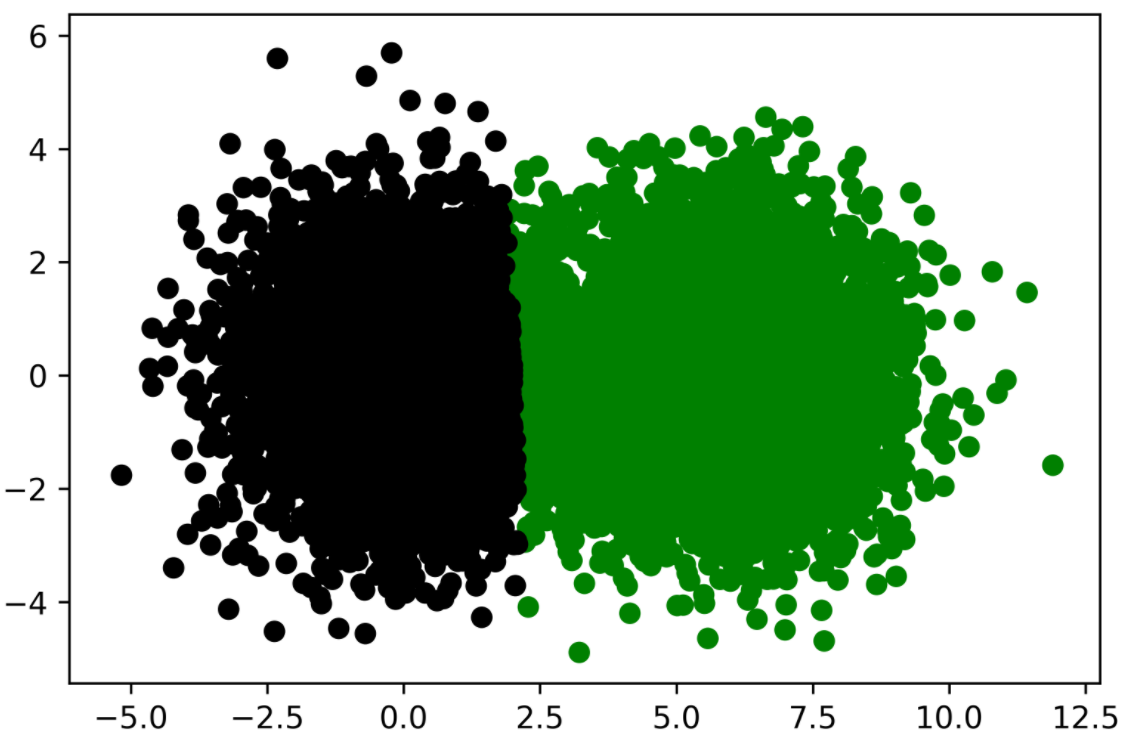 Figure 4. Darts colored based on proximity to recomputed centers. The two clusters now appear to be more even.

The results are already looking better, although they’re not quite as effective as they could be. The cluster’s centers still appear a little off. Let’s remedy the results by repeating the mean-based centrality adjustment over 10 additional iterations (figure 5). 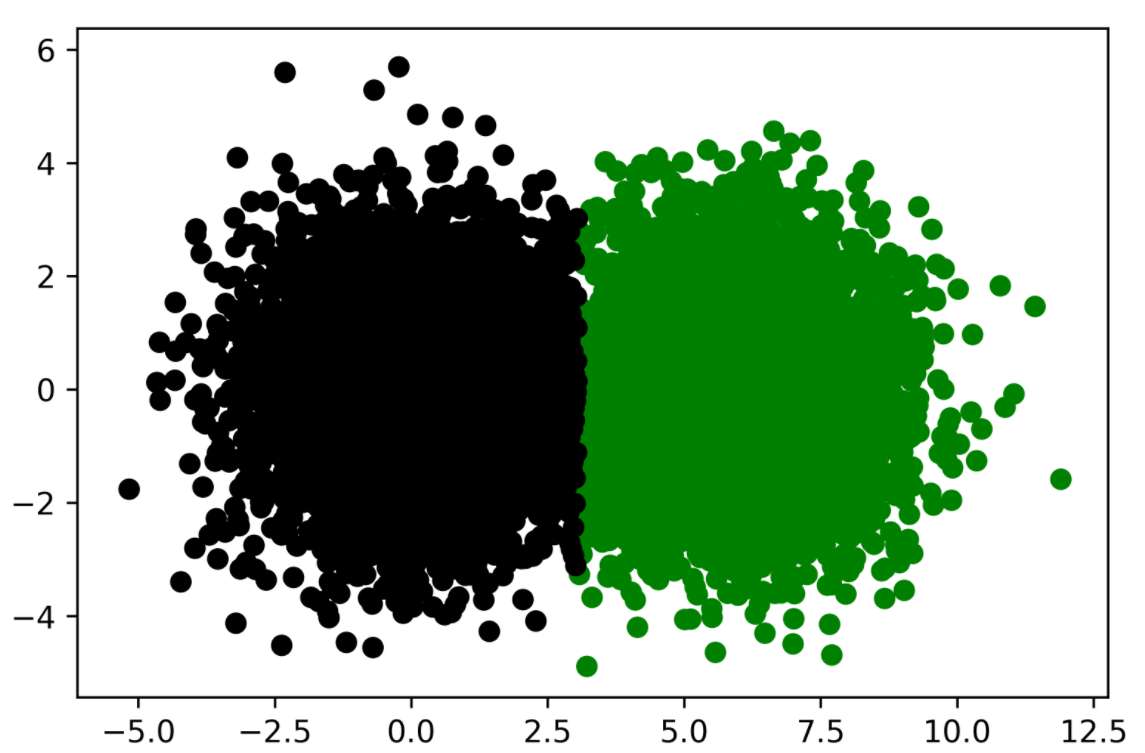 Figure 5. Darts colored based on proximity to iteratively recomputed centers

The two sets of darts are now perfectly clustered! We have essentially replicated the K-means clustering algorithm, which organizes data using centrality.

Check out part 2 here. If you want to learn more about the book, check it out on Manning’s liveBook platform here.