Save 37% on Deep Learning and the Game of Go. Just enter code fccpumperla into the discount code box at checkout at manning.com.

What games does tree search apply to?

Tree search algorithms are mainly relevant to games where you take turns, and there’s a discrete set of options on each turn. For example, poker is a popular card game that meets this description, and the tips below are relevant even if you play such games online on sites like dewa-poker.net. They are highly likely to give you the upper hand so keep reading. Moreover, a good friend of mine is a keen online gambler. He loves to play Pkv Games and his poker face cannot be beaten. With this in mind, I will definitely be sharing some of the information below with him to see if he can apply any of the tips to his own gameplay strategy. Unfortunately, tree search won’t help a computer play basketball, charades, or World of Warcraft. However, we can further classify board and card games according to two useful properties.

Table 1. Classifying board and card games

In this article, we primarily focus deterministic perfect information games. In particular, the minimax algorithm generates perfect play for any such games.

Anticipating your opponent with minimax search

How can we program a computer to decide what move to make next in a game? To start, we can think about how humans would make the same decision. Let’s start with the simplest deterministic perfect information game: tic-tac-toe. The technical name for the strategy we’ll describe is minimaxing (a contraction of “minimizing and maximizing”). You can sum it up in one sentence: assume your opponent is as smart as you are. Let’s see how minimaxing works in practice. 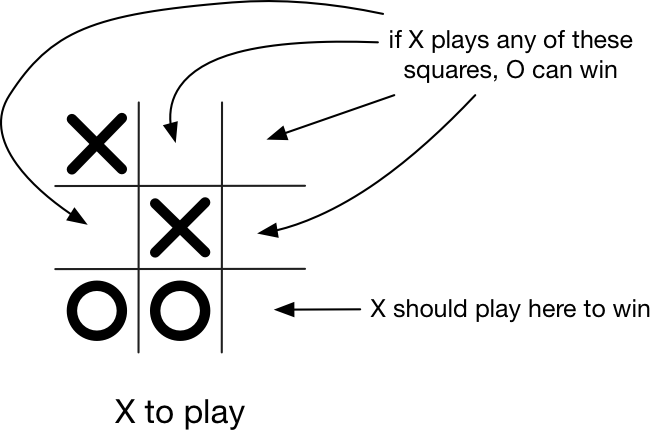 Figure 1. What move should X make next? This is an easy one: playing in the lower right corner wins the game.

Take a look at figure 1. What move should X make next? No tricks here; taking the lower right corner wins the game. We can make that into a general rule: take any move that immediately wins the game. This plan can’tgo wrong. We could implement this rule in code with something like this:

Loop over all legal moves

This is a winning move! No need to look further

Can’t win on this turn

Figure 2 illustrates the hypothetical board positions this function examines. This structure, where a board position points to possible follow-ups, is called a game tree.

Figure 2. An illustration of an algorithm to find the winning move. We start with the position at the top. We loop over every possible move and calculate the game state that would result if we played that move. Then we check if that hypothetical game state is a winning position for X.

Let’s back up a bit. How did we get in this position? Perhaps the previous position looked like figure 3. The O player naively hoped to make three in a row across the bottom. But that assumes that X cooperates with the plan. This gives a corollary to our previous rule: don’t choose any move that gives our opponent a winning move. 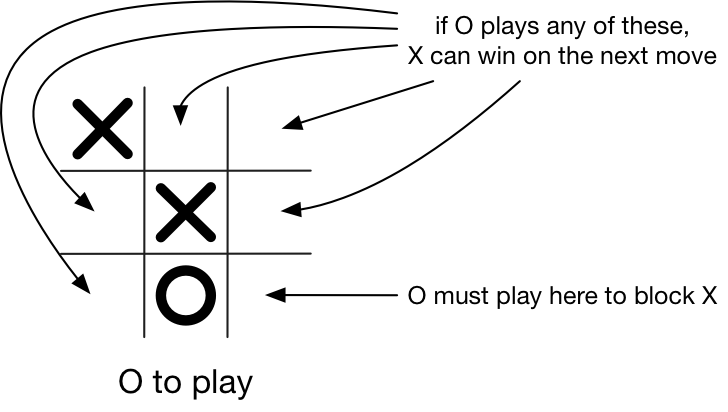 Figure 3. What move should O make next? If O plays in the lower left, we must assume that X will follow up in the lower right to win the game. O must find the only move that prevents this.

? possible_moves will become a list of all moves worth considering

? Loops over all legal moves

? Calculates what the board would look like if we play this move

? Does this give our opponent a winning move? If not, this move is plausible 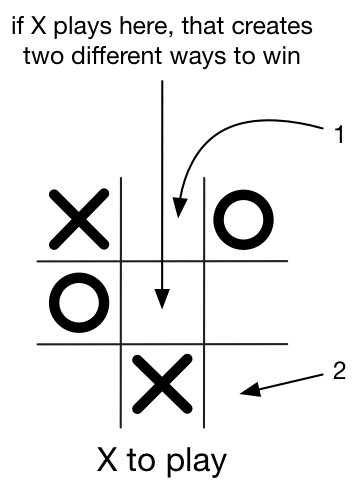 Figure 4. What move should X make? If X plays in the center, there are two ways to complete three-in-a-row: top middle and lower right. O can only block one of them, and X is guaranteed a win.

Now, we know that we must block our opponent from getting into a winning position. Therefore, we should assume that our opponent’s going to do the same to us. With that in mind, how can we play to win? Take a look at the board in 4. If we play in the center, we have two ways to complete three in a row: top middle or lower right. The opponent can’t block them both. We can describe this general principle as: look for a move where our opponent can’t block from setting up a winning move. Sounds complicated, but it’s easy to build this logic on top of the functions we’ve already written:

Loop over all legal moves

Does our opponent have a good defense? If not, pick this move

No matter what move we pick, our opponent can prevent a win

Our opponent will anticipate that we’ll try to do this, and also try to block such a play. We can start to see a general strategy forming:

Notice that all three of our functions have a similar structure. Each function loops over all valid moves and examines the hypothetical board position that we’d get after playing that move. Furthermore, each function builds on the previous function to simulate what our opponent would do in response. If we generalize this concept, we get an algorithm that can always identify the best possible move.

In the previous section, we examined how to anticipate your opponent’s play one or two moves ahead. In this section, we show how to generalize that strategy to pick perfect moves in tic-tac-toe. The core idea is exactly the same, but we need the flexibility to look an arbitrary number of moves in the future.

First let’s define an enum that represents the three possible outcomes of game: win, loss, or draw. These possibilities are defined relative to particular player: a loss for one player is a win for the other.

Listing 1. An enum to represent the outcome of a game.

Imagine we have a function best_result that takes a game state and tells us the best outcome that a player can achieve from that state. If that player can guarantee a win – by any sequence, no matter how complicated – the best_result function returns GameResult.win. If that player can force a draw, it returns GameResult.draw. Otherwise, it returns GameResult.loss. If we assume that function already exists, it’s easy to write a function to pick a move: we loop over all possible moves, call best_result, and pick the move that leads to the best result for us. There may be multiple moves that lead the equal results; we can pick randomly from them in that case. Listing 2 shows how to implement this.

Loops over all legal moves

Calculates the game state if we select this move

Since our opponent plays next, figure out their best possible outcome from there. Our outcome is the opposite of that

Categorizes this move according to its outcome

Picks a move that leads to our best outcome

Now the question’s how to implement best_result. As in the previous section, we can start from the end of the game and work backward. Listing 3 shows the easy case: if the game is already over, there’s only one possible result. We return it.

Listing 3. First of the minimax search algorithm. If the game is already over, we already know the result.

If we’re somewhere in the middle of the game, we need to search ahead. By now, the pattern should be familiar. We start by looping over all possible moves and calculating the next game state. Then we must assume our opponent will do their best to counter our hypothetical move. To do this we can call best_result from this new position. That tells us the result our opponent can get from the new position; we invert it to find out our result. Out of all the moves we consider, we select the one that leads to the best result for us. Listing 4 shows how to implement this logic, which makes up the second half of best_result. Figure 5 illustrates the board positions this function considers for a particular tic-tac-toe board. 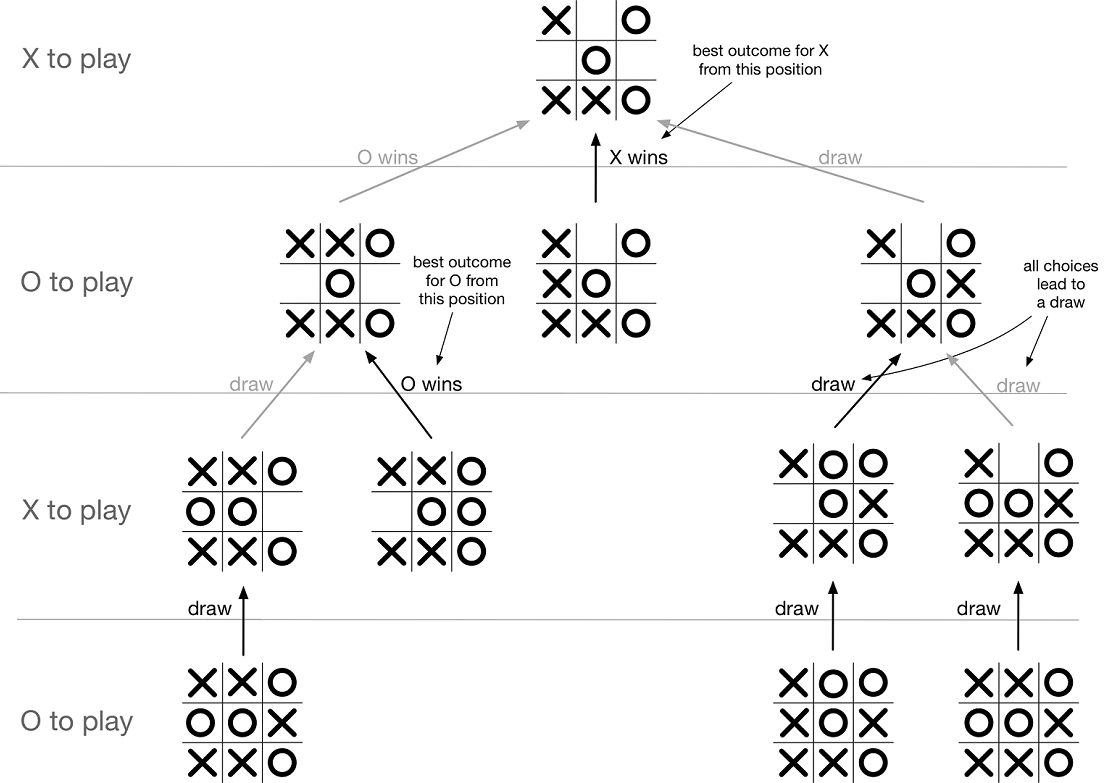 See what the board would look like if we play this move.

Find out our opponent’s best move.

Whatever our opponent wants, we want the opposite.

See if this result is better than the best we’ve seen so far.

If we apply this algorithm to a simple game, such as tic-tac-toe, we get an unbeatable opponent. You can play against it and see for yourself: try the play_ttt.py example on GitHub (https://github.com/maxpumperla/deep_learning_and_the_game_of_go). In theory, this algorithm also works for chess, Go, or any other deterministic perfect information game. In reality, it’s far too slow for any of those games.

To learn about enhancing tree search with deep learning to make game-playing machines, check out the book on liveBook here and see this slide deck.