Save 37% on RxJava for Android Developers. Just enter code fcctuominen into the discount code box at checkout at manning.com.

The subscribe function returns a Subscription object that allows us to manage the created relationship between the observable and the subscriber. “Us” in this context is the creator of the logic—the observables and subscribers are building blocks at our disposal.

Imagine that the following newspaper is delivered to the mail box each morning: 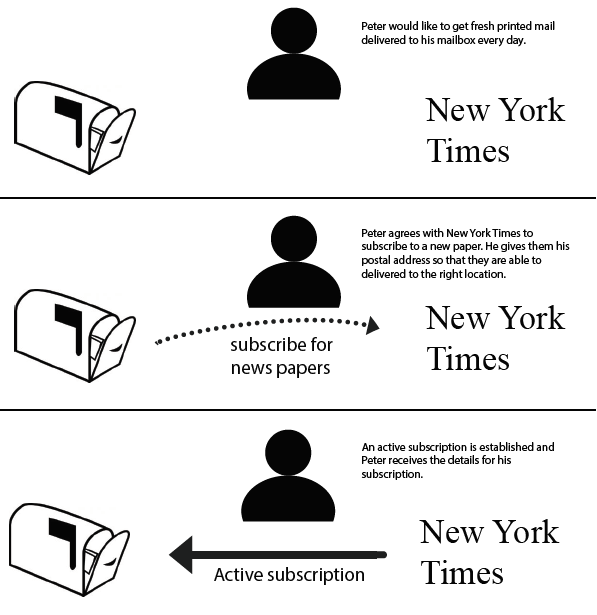 After the subscription is created, it defines a relationship between the source and the target—or the observable and subscriber. This we’ve seen before:

But in our example, isn’t Peter the subscriber?

The answer is linguistically yes, but in Rx terms Peter only establishes the relationship between the mailbox and the newspaper company. He’s the one who defines how the two should interact.

This may sound a little strange at first. Think about it this way: the mailbox doesn’t have any control of what is delivered into it. The same way an Rx subscriber doesn’t know where the data comes from. It’s completely unaware of a subscription.

What’s Peter then? It turns out Peter is the program logic we write: the graph itself. The graph logic are the instructions that describe how the program should work.

In this case the logic could be written as:

This is how all subscriptions work in RxJava. In other Reactive libraries there are different ways—some don’t even have subscriptions—but for this article let’s assume the graphs are always established with subscriptions.

For more about the book, see this page.