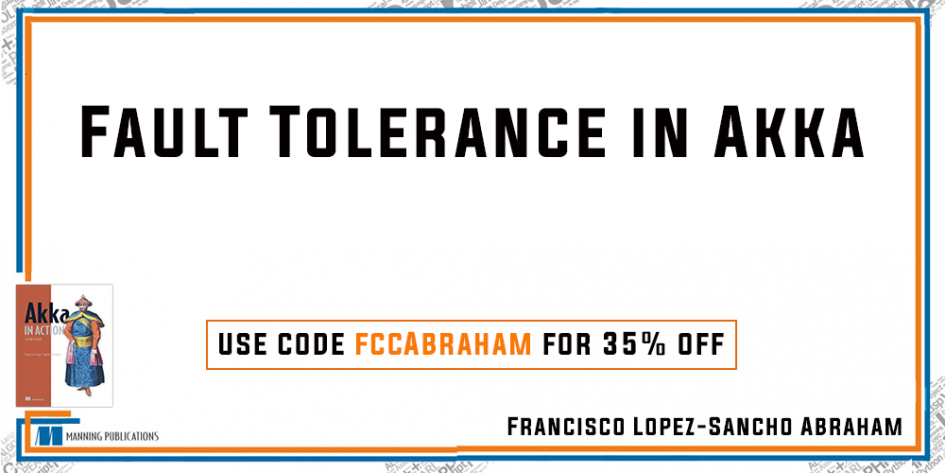 Take 35% off Akka in Action, Second Edition by entering fccabraham2 into the discount code box at checkout at manning.com.

What fault tolerance is (and what it isn’t)

Let’s start with a definition of what we mean when we say a system is fault tolerant, and why you’d write code to embrace the notion of failure. In an ideal world, a system is always available and can guarantee that it’s successful with each undertaken action. The only two paths to this ideal are using components that can never fail or accounting for every possible fault by providing a recovery action, which is also assured of success. In most architectures, what you have instead is a catch-all mechanism that terminates as soon as an uncaught failure arises. Even if an application attempts to provide recovery strategies, testing them is hard, and being sure that the recovery strategies themselves work adds another layer of complexity. In the procedural world, each attempt to do something requires a return code which is checked against a list of possible faults. Exception handling has become a fixture of modern languages, promising a less onerous path to providing the various required means of recovery. Although it has succeeded in yielding code that doesn’t need to have fault checks on every line, the propagation of faults to ready handlers hasn’t significantly improved.

The idea of a system which is free of faults sounds great in theory, but the sad fact is that building one which is also highly available and distributed is impossible for any non-trivial system. The main reason for this is because large parts of any non-trivial system aren’t under your control, and these parts can break. Then there’s the prevalent problem of responsibility: as collaborators interact, often using shared components, it’s not clear who is responsible for which possible faults. A good example of potentially unavailable resources is the network: it can go away at any time or be partly available, and if you want to continue operation, you’ll have to find some other way to continue communicating, or maybe disable communication for some time. You might depend on third-party services that can misbehave, fail, or be sporadically unavailable. The servers your software runs on can fail or can be unavailable, or even experience total hardware failure. You obviously can’t magically make a server reappear out of its ashes or automatically fix a broken disk to guarantee writing to it. This is why let it crash was born in the rack-and-stack world of the telcos, where failed machines were common enough to make their availability goals impossible without a plan that accounted for them.

Because you can’t prevent all failures from happening, you’ll have to be prepared to adopt a strategy, keeping the following in mind:

The Akka toolkit doesn’t include a fault tolerance silver bullet. You’ll still need to handle specific failures, but can do it in a cleaner, more application-specific way. The Akka features described in table 1 enables you to build the fault tolerant behavior you need.

“But wait a minute,” you might say, “Why can’t we use plain old objects and exceptions to recover from failures?” Normally exceptions are used to back out of a series of actions to prevent an inconsistent state instead of recovering from a failure in the sense we’ve discussed this far. Let’s see how hard it is to add fault recovery using exception handling and plain old objects in the next section.

Note: In this article we aren’t covering the tooling for recovering from lightning bolts or things alike. If a computer bursts into flames, we need to have in place clustering.

Let’s look at an example of an application that receives logs from multiple threads, “parses” interesting information out of the files into row objects, and writes these rows into some database. Some file watcher process keeps track of added files and informs many threads in some way to process the new files. Figure 1 gives an overview of the application and highlights the part that we’ll zoom in on (“in scope”). 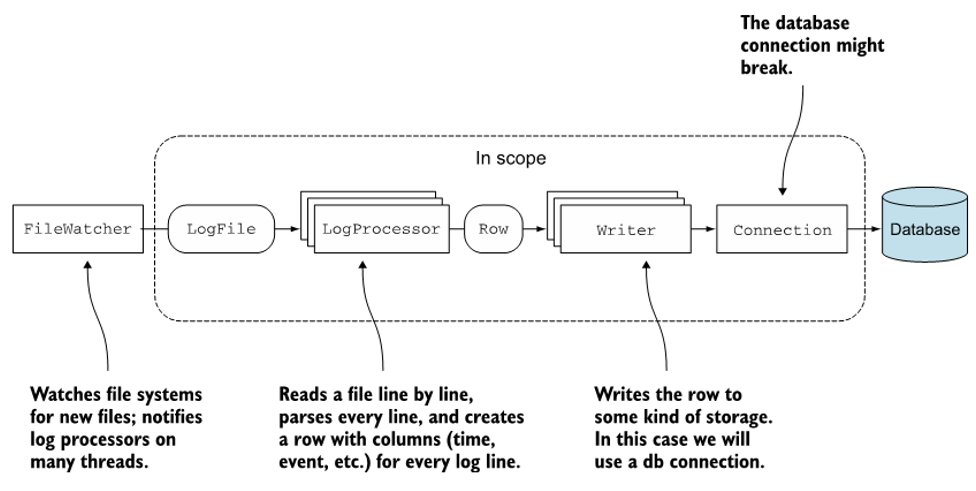 If the database connection breaks, we want to be able to create a new connection to another database and continue writing, instead of backing out. If the connection starts to malfunction, we might want to shut it down; no part of the application uses it anymore. In some cases, we’ll want to reboot the connection, hopefully to get rid of some temporary bad state in it. Pseudo code is used to illustrate where the potential problem areas are. We’ll look at the case where we want to get a new connection to the same database using standard exception handling.

First, we set up all objects which are used from the threads. After setup, they’ll be used to process the new files that the file watcher finds. We set up a database writer that uses a connection. Figure 2 shows how the writer is created.

The dependencies for the writer are passed to the constructor as you’d expect. The database factory settings, including the different URLs, are passed in from the thread that creates the writer. Next, we set up some log processors; each gets a reference to a writer to store rows, as shown in figure 3.

Figure 4 shows how the objects call each other in this example application.

The flow shown in figure 3. gets called from many threads to simultaneously process files found by the file watcher. Figure 4 shows a call stack where a DbBroken-ConnectionException is thrown, which indicates that we should switch to another connection. The details of every method are omitted; the diagram only shows where an object eventually calls another object.

Instead of throwing the exception up the stack, we’d like to recover from the DbBrokenConnectionException and replace the broken connection with a working one. The first problem we face is that it’s hard to add the code to recover the connection in a way that doesn’t break the design. Also, we don’t have enough information to re-create the connection: we don’t know which lines in the file have already been processed successfully and which line was being processed when the exception occurred. In Figure 5 we show the difficulties of communication failures among different parts of the stack. 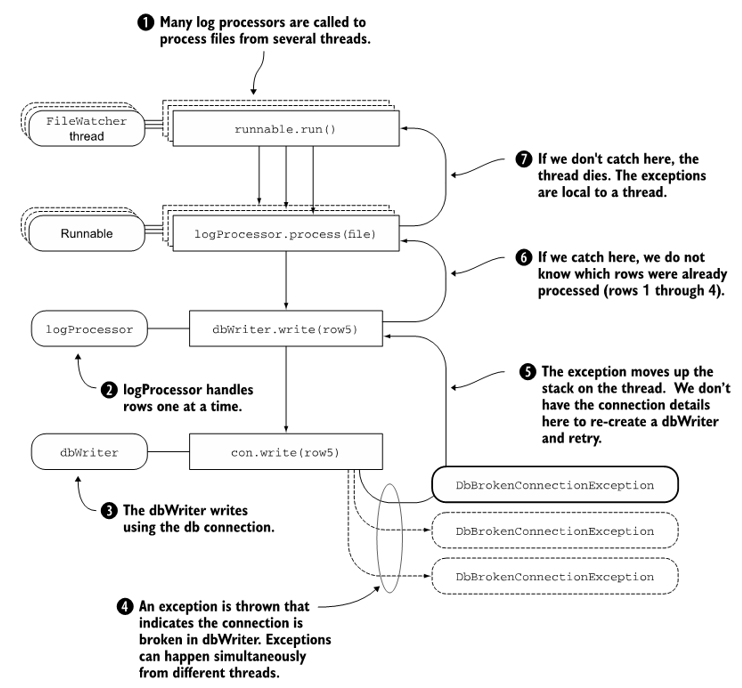 Making both the processed lines and the connection information available to all objects breaks our simple design and violates some basic best practices like encapsulation, inversion of control, and single responsibility, to name a few. (Good luck at the next code peer review with your clean coding colleagues!) We want the faulty component replaced. Adding recovery code directly into the exception handling entangles the functionality of processing log files with database connection recovery logic. Even if we find a spot to re-create the connection, we’d have to be careful that other threads don’t get to use the faulty connection as we’re trying to replace it with a new one, because otherwise some rows are lost.

Also, communicating exceptions between threads isn’t a standard feature; you’ll have to build this yourself, which isn’t a trivial thing to do. Let’s look at the fault tolerance requirements to see if this approach even stands a chance:

This doesn’t look promising: getting everything to work correctly is going to be complex and a real pain. It looks like some fundamental features are missing for adding fault tolerance to our application in an easy way:

Luckily we have a simpler solution. You’ve already seen some of the actor features that can help simplify these problems. Actors can be (re-)created from Behaviors functions and communicate through actor references instead of direct references. In the next section, we look at how actors provide a way to untangle the functional code from the fault-recovery code, and how the actor lifecycle makes it possible to suspend and restart actors (without invoking the wrath of the concurrency gods) in the course of recovering from faults.

Wrap it up and Let it crash

In the previous section, we showed that building a fault-tolerant application with plain old objects and exception handling is a complex task. Let’s look at how actors simplify this task. What should happen when an Actor processes a message and encounters an exception? We already discussed why we don’t want to graft recovery code into the operational flow, and catching the exception where the business logic resides isn’t an option.

Instead of using one flow to handle both normal code and recovery code, an Akka Behavior provides composition that allows creating and then mixing two different flows: one for normal logic and one for fault recovery logic. The normal flow consists of actors that handle normal messages, the happy path; the recovery flow consists of another behavior that, wrapping up the normal one, only deals with Exceptions. Figure 6 shows a supervisor (supervising behavior) only concerning about recovery actions and an actor taking care of the domain logic. Then both can be mixed by wrapping up the actor’s behavior inside the supervision one. 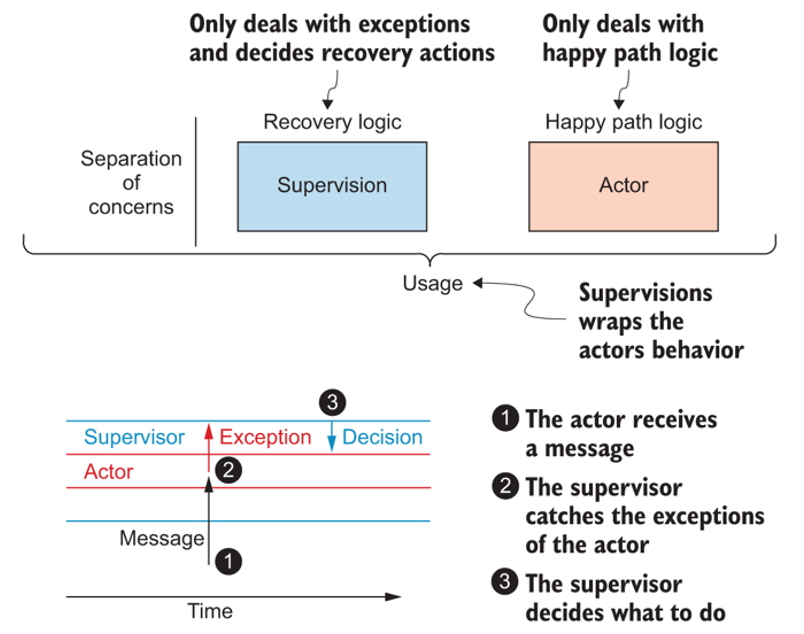 Instead of catching exceptions in an actor, we’ll let the actor crash. The actor code for handling messages only contains happy path processing logic and no error handling or fault recovery logic, and it’s effectively independent of the recovery process, which keeps things much clearer. The mailbox for a failing actor is suspended until the supervising behavior in the recovery flow has decided what to do with the exception. Messages still can be sent to it though; they’ll be stashed.

A supervisor doesn’t only “catch exceptions;” rather it decides what should happen with the failing actors that it supervises based on the Exception. The supervising behavior doesn’t try to fix the actor or its state. It renders a judgment on how to recover, and then triggers the corresponding strategy. The supervisor has three options when deciding what to do with the actor:

We’ll need to take some special steps to recover the failed message, which we’ll discuss in detail later when we talk about how to implement a restart. Suffice it to say that in most cases, you don’t want to reprocess a message, because it probably caused the error in the first place. An example of this is the case of the LogProcessor encountering a corrupt file or unparsable line in it: reprocessing corrupt files could end up in what’s called a poisoned mailbox—no other message will ever get processed because the corrupting message is failing over and over again. For this reason, Akka chooses not to keep the failing message into the mailbox after raising an exception, but there’s a way to do this yourself if you’re absolutely sure that the message didn’t cause the error, which we’ll discuss later.

Let’s recap the benefits of the let-it-crash approach: