Take 37% off Spring Security in Action. Just enter fccspilca into the discount code box at checkout at manning.com.

Spring Security has quickly become the de facto solution for implementing application-level security in apps developed with Spring Framework. And I don’t think I need to mention anymore that Spring is the first choice today for the development of enterprise applications in the Java ecosystem. While security in the software system is a must, Spring Security has become a necessary tool for every Spring developer. But Spring Security is known not to have a smooth learning curve and we can argue that its developers weren’t too attentive to the details that might have made it easy to work with. Here are five awkward things about Spring Security that actually make sense:

No. 5 – Unauthenticated vs. Failed authentication 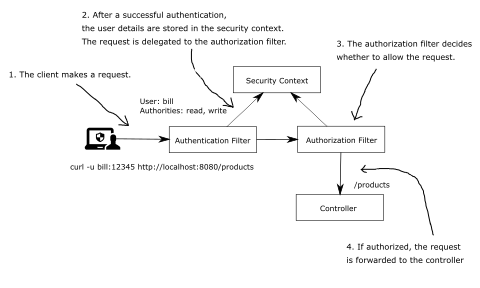 Figure 1. After the application authenticates the user, it decides whether to allow the request. 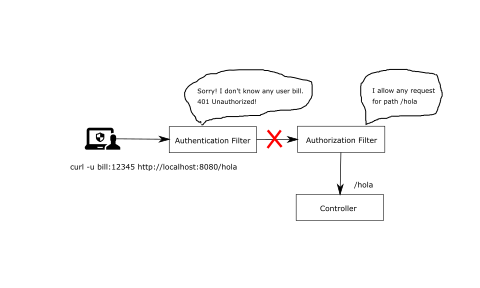 To be more precise, let’s take an example. You have created an endpoint /hola in your application and configured it to be authorized for anyone using the permitAll() method in the configuration class. If you call the /hola endpoint without a user, it will return the body “Hola!” as expected, and the response status will be 200 OK.

But if you call the endpoint with non-valid credentials, the status of the response is 401 Unauthorized. In the next call, I use an invalid password.

Some could argue here that using permitAll() should make the application always allow any request from anybody. This behavior of the framework might look strange. Why does it care about username and password if it would approve the request without the credentials? But it makes sense, as the framework evaluates any username and password if you provide them in the request. The application always does authentication before authorization.

No. 4 – Method names in the UserDetails interface

In Spring Security, the UserDetails interface describes the user in the way the framework expects you to implement it. Nothing strange yet. It declares obvious methods like getUsername()—meant to return the username, getPassword(), and getAuthorities()—which  are related to privileges evaluated during authorization. But the contract defines four other methods that could sound strange (at least when you see them the first time):

The isEnabled() sounds good. But what’s with all the other three double negations? I know a few people that could get a heart-attack seeing this kind of naming at a code-review! Why isAccountNonExpired()? Couldn’t that simply be isAccountExpired()? In the end, it’s still your decision if you need to return true or false when you implement it. Well, it seems this naming convention was chosen on purpose. The human brain is made to understand false as negativity and true as positivity subconsciously. All four methods are made such that they all should return false for negation and true for the positive scenario. This chosen approach of naming the methods is, of course, still debatable. While it makes sense from one point of view, it is still a pain for a beginner for whom the double negation could create confusion.

I’ve often seen ANT and MVC matchers creating confusion among developers. Generally, the confusion happens because both matcher methods use in the end ANT syntax to refer to paths. Then what’s the difference between the two, and when should we use them? MVC matchers are designed to apply precisely to what the Spring MVC @RequestMapping and related annotations understand, as we will see with the following example.

Let’s assume you have an endpoint that you configured in one of the controller classes of your application, as presented in the next code snippet:

You would then use ANT matchers to secure the endpoint, as presented in the next code snippet.

With this configuration, you might be stupefied to observe that authorization is configured correctly for the /hello endpoint, but not also for the /hello/ path. By this, I mean that you need to authenticate to access the /hello endpoint, but you need no credentials for the /hello/ path which, obviously, leads to the same endpoint. This is huge! Developers not knowing this and using ANT matchers could potentially have unprotected endpoints. Just replace the antMatchers() method with mvcMatchers(), as presented in the next code snippet.

If you test the change now, you’ll see that both /hello and /hello/ are protected as you expected from the beginning. Being that in Spring MVC, both are leading to the same endpoint, when you use MVC matchers, Spring knows and protects both paths. For this reason, I always recommend MVC matchers above ANT matchers when applying authorization configurations with Spring Security.

No. 2 – The auto-configuration of the default PasswordEncoder component

If you work with Spring Security and Spring Boot, which is quite common nowadays, you might have observed how the auto-configuration for Spring Security is working. By default, Spring Boot configures a UserDetailsService, which manages one user in-memory. The username of this default user is “user”, a UUID is generated for the password and the credentials are printed in the console when you start the application. They’ll look similar to the next code snippet.

The first thing you do is to override this configuration, of course. So this is where I’ve seen a lot of developers get confused when starting with Spring Security and Spring Boot. You’ll define your custom UserDetailsService, and when trying to start your application, you’ll find in the console an error message. The message is complaining about the absence of a PasswordEncoder.

Awkward or not, the PasswordEncoder is a mandatory component in the HTTP Basic authentication flow (figure 3). But where was it until now? Why is the application complaining now? 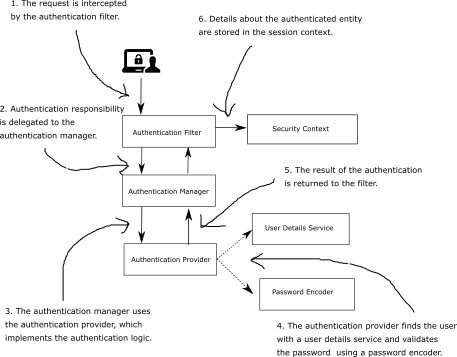 No. 1 – The passwordEncoder() method in the User builder class

In frameworks and libraries, we might sometimes find names that are unfortunately given in such a way that they create confusion. This is also the case with the PasswordEncoder interface and the passwordEncoder() method of the User builder class. Again, this is a point that I have seen create confusion among developers. The names of these two, however, are perhaps not so poorly chosen as it might seem at first glance.

The PasswordEncoder is the interface describing the contract for the implementation of one of the components used in the authentication process.

Two methods define the responsibility of this component:

Both names, taken individually, correctly describe the elements they define. But when first learning them, they could confuse you. One could argue that this negatively impacts the learning curve of the framework, which I would find hard to refute.

No framework or library is perfect, and there is endless material for debate regarding which is better in a given curcumstance. Spring Security does a great job of minimizing the time needed to bake application-level security into your system. It is an excellent result of the work of a vast community continuously acting in the improvement of Spring Framework. It just takes a bit of effort to learn how to use it well.

If you want to learn more about the book, go check it out on our browser-based liveBook reader here.