Getting to Know GPUs 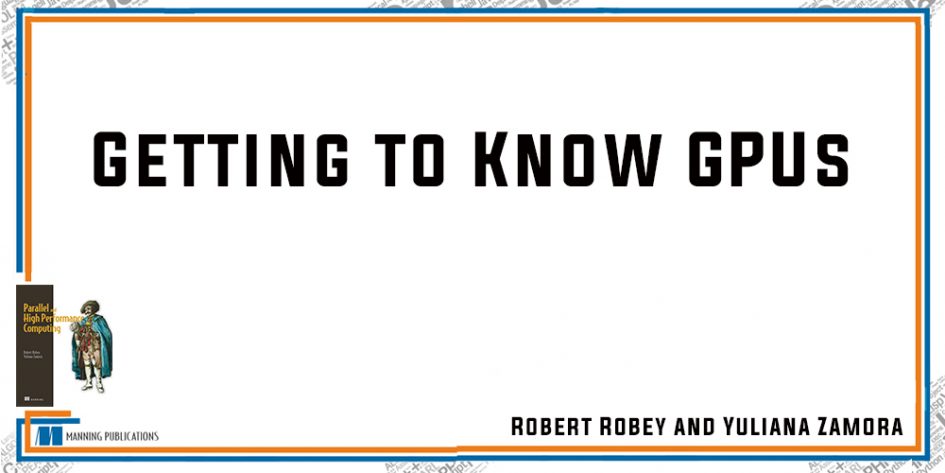 Take 37% off Parallel and High-Performance Computing by entering fccrobey into the discount code box at checkout at manning.com.

The CPU-GPU system as an accelerated computational platform

GPUs are everywhere. They can be found in cell phones, tablets, personal computers, consumer-grade workstations, gaming consoles, high performance computing centers, and cloud computing platforms. GPUs provide additional compute power on most modern hardware and accelerate many operations you may not even be aware of. As the name suggests, GPUs were designed for graphics related-computations, and nowadays are usually associated with gaming, 3D design and crypto mining. Indeed, many will seek out experts like Tech Review Advisor to know which option they should go for when it comes to their needs. Consequently, GPU design is focused on processing large blocks of data (triangles or polygons) in parallel, a requirement for graphics applications. When compared to CPUs, which can handle tens of parallel threads or processes in a clock cycle, GPUs are capable of processing thousands of parallel threads simultaneously. Because of this design, GPUs offer a considerably higher theoretical peak performance that can potentially reduce the time to solution and the energy footprint of an application, relative to a CPU-only implementation.

Computational scientists, always on the lookout for computational horsepower, were attracted to using GPUs to perform more general-purpose computing tasks. Because GPUs were designed for graphics, the languages originally developed to program them, like OpenGL, focused on graphics operations. To implement algorithms on GPUs, programmers had to reframe their algorithms in terms of these graphic operations, which was time consuming and error-prone. Extending the use of the graphics processor to non-graphic workloads became known as General Purpose GPU (GPGPU) computing.

The continued interest and success of GPGPU computing led to the introduction of a flurry of GPGPU languages. The first to gain wide adoption was the Compute Unified Device Architecture (CUDA) programming language for Nvidia GPUs, which was first introduced in 2007.

The dominant open standard GPGPU computing language is OpenCL (Open Computing Language), developed by a group of vendors led by Apple and released in 2009.

Despite the continual introduction of GPGPU languages, or maybe because of it, many computational scientists found the original, “native”, GPGPU languages difficult to use. As a result, higher level approaches using directive-based APIs have gained a large following and corresponding development effort by vendors.

We have to summarize the new directive-based GPGPU languages, OpenACC and OpenMP, as an unqualified success. These languages and APIs have allowed programmers to focus more on developing their applications, rather than expressing their algorithm in terms of graphics operations. The end result has often been tremendous speedups in scientific and data science applications.

GPUs are best described as accelerators. Accelerators have long been used in the computing world. First let’s define what we mean by an accelerator.

A GPU is an additional hardware component that can perform operations alongside a CPU. GPUs come in two flavors:

Integrated GPUs are either integrated directly into the CPU chip or on a motherboard. Integrated GPUs share RAM resources with the CPU. Dedicated GPUs are attached to the motherboard via a Peripheral Component Interconnect (PCI) slot. The PCI slot is a physical component that allows data to be transmitted between the CPU and GPU. It’s commonly referred to as the PCI Bus.

The AMD integrated GPUs are called Accelerated Processing Units (APUs) which are a tightly-coupled combination of the CPU and a GPU. The source of the GPU design originally came from the AMD purchase of the ATI graphics card company in 2006. In the AMD APU, the CPU and GPU share the same processor memory. The GPUs are smaller than a discrete GPU, but still proportionally give GPU graphics (and compute) performance. The real target for AMD for APUs is to provide a more cost-effective, but performant system for the mass market. The shared memory is also attractive because it eliminates the data transfer over the PCI Bus which is often a serious performance bottleneck.

The ubiquitous nature of the integrated graphics processor is important. For us, it means that many commodity desktops and laptops have some compute acceleration capability. The goal on these systems is a relatively modest performance boost and perhaps reducing the energy cost or improving battery life. For extreme performance, the discrete GPUs are still the undisputed performance champions.

In this article, we focus primarily on GPU accelerated platforms with dedicated GPUs, also called discrete GPUs. Dedicated GPUs generally offer more compute power than integrated GPUs. Additionally, they can be isolated to execute general purpose computing tasks. Figure 1 conceptually illustrates a CPU-GPU system with a dedicated GPU. A CPU has access to its own memory space (CPU RAM) and it’s connected to a GPU via a PCI bus. It’s able to send data and instructions over the PCI Bus for the GPU to work with. The GPU has its own memory space, separate from the CPU memory space.

In order for work to be executed on the GPU, at some point, data must be transferred from the CPU to the GPU. When the work is complete, and the results are going to be written to file, the GPU must send data back to the CPU. The instructions the GPU must execute are also sent from CPU to GPU. Each one of these transactions is mediated by the PCI Bus. Although we won’t discuss how to make these actions happen in this article, we discuss the hardware performance limitations of the PCI Bus. Due to the limitations of the PCI bus, the GPU can potentially have worse performance than a CPU only code. We also discuss the internal architecture of the GPU and the performance of the GPU with regards to memory operations and floating-point operations.

The GPU and the thread engine

For those of us who have done thread programming over the years on a CPU, the graphics processor is like the ideal thread engine. The components of this thread engine are

Let’s take a look at the hardware architecture of a GPU to get an idea of how it performs this magic. To show this conceptual model of a GPU, we abstract the common elements from different GPU vendors and even between design variations from the same vendor.

We must remind you that there are hardware variations which aren’t captured by these abstract models. Adding to this the polyglot of terminology currently in use, it’s unsurprising that it’s difficult for a newcomer to the field to understand the GPU hardware and programming languages. Still, this terminology is relatively sane compared to the graphics world with vertex shaders, texture mapping units and fragment generators.

Table 1 summarizes the rough equivalence of terminology, but beware that because the hardware architectures aren’t exactly the same, the correspondence in terminology varies depending on the context and user.

The last row in table 1 is for a hardware layer that implements a single instruction on multiple data, commonly referred to as SIMD. Strictly speaking, the Nvidia hardware doesn’t have vector hardware (SIMD), but emulates it through a collection of threads in what it calls a warp in a single instruction, multiple thread (SIMT) model. Other GPUs can also perform SIMT operations on what OpenCL and AMD call subgroups that are equivalent to the Nvidia warps. This article focuses on the GPU hardware, its architecture and concepts.

Often, GPUs also have hardware blocks of replication, some of which are listed in table 9.2, to simplify the scaling of their hardware designs to more units. These units of replication are a manufacturing convenience, but they often show up in the specification lists and discussions. 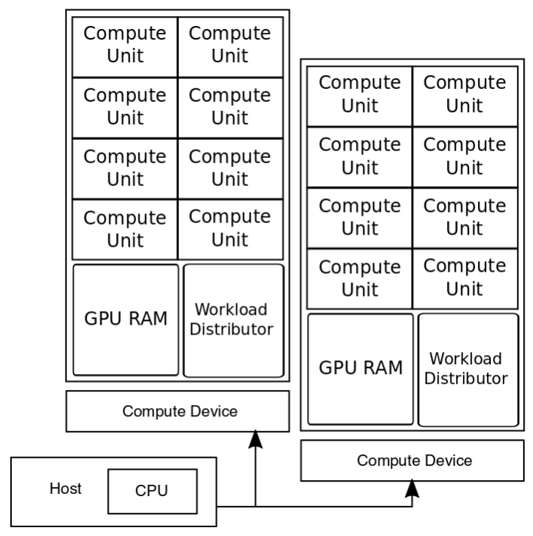 Figure 2. A simplified block diagram of a GPU system showing two compute devices, each of them a separate GPU, GPU memory, and multiple Compute Units (CUs) on each compute device. The Nvidia Cuda terminology refers to compute units as Streaming Multiprocessors (SMs).

DEFINITION: Compute device (OpenCL) – any computational hardware that can perform computation and supports OpenCL. This can include GPUs, CPUs, or even more exotic hardware such as embedded processors or FPGAs.

The simplified diagram in figure 2 is our model for describing the components of a GPU and it’s useful for understanding how a GPU processes data. A GPU is composed of:

These Compute Units have their own internal architecture, often referred to as the microarchitecture. Instructions and data received from the CPU are processed by the workload distributor. This distributor coordinates instruction execution and data movement onto and off the compute units. The achievable performance of a GPU depends on

In this section, we explore each of the components in our model of a GPU. With each component, we discuss models for theoretical peak bandwidth. Additionally, we show how to use micro-benchmark tools.

The compute unit is the streaming multiprocessor

A GPU compute device has multiple compute units. Compute units (CUs) is the term agreed to by the community for the OpenCL standard. Nvidia calls these streaming multiprocessors (SMs) and Intel refers to them as subslices.

Processing elements are the individual processors 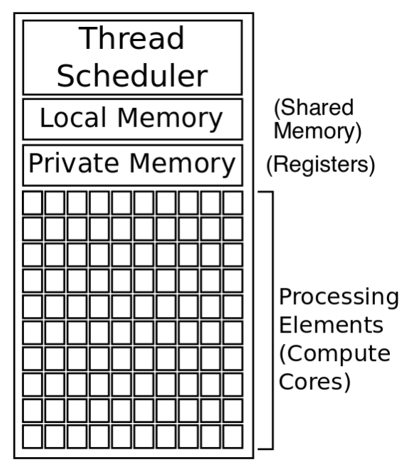 Figure 3. Simplified block diagram of a Compute Unit (CU) with a large number of Processing Elements.

Within each processing element, it may be possible for an operation to be performed on more than one data item. Depending on the details of the GPU microprocessor architecture and the GPU vendor, these are referred to as SIMT, SIMD, or Vector operations. A similar type of functionality may be provided by ganging processing elements together.

Calculating the peak theoretical flops for some leading GPUs

The flops per cycle accounts for the fused-multiply add (FMA) which does two operations in one cycle.

Both the Nvidia V100 and the AMD Vega 20 give impressive floating point peak performance. The Ampere shows some additional improvement in floating point performance, but it’s the memory performance that promises greater increases. The Intel integrated GPU is also quite impressive given that it’s limited by the available silicon space and lower nominal design power of a CPU. With Intel announcing plans for a discrete graphics card in 2020, there’ll be more GPU options in the future.

That’s all for this article. If you want to learn more about the book, check it out on our browser-based liveBook platform here.