What Is an Array and What can I Do with One?

Save 37% on Hello Swift! Just enter code fccbakshi into the discount code box at checkout at manning.com.

What is an array?

An array is a group of multiple variables of the same kind. Consider this example:

If you wanted to create this array in code, you could do this:

The line of code above is an example of creating an Array, with String values in it. The square brackets ( [] ) around the “String” in the type of the variable tell Swift that this is an Array. Then, the code sets values inside of the array to Frank, Amy, Maya, and Tom.

Now, I have to tell you something which is both important and confusing. Arrays start counting with 0, not 1. If you think back to the example of the students in class getting slips of paper, the first slip given out will say 0, not 1. If ten slips are given out, they’ll be numbered: 0, 1, 2, 3, 4, 5, 6, 7, 8, and 9. In fact, it makes sense because Integers start with 0. It may seem a little weird at first, because in school, we learn to count from 1. We almost forget about Zero! (poor zero…)

You have an array with values. And this helps you because it’s easy to get the values back out of the array, in order.

Think back to the earlier example about the students with numbered slips of paper. Pretend that it’s time for the next student to give a report. The teacher might not remember who’s next in line, but he knows that the last student who did a report was number 2, and all he has to do’s call on number 3.

To get the name of someone stored in the array you created, you also (in code) use the number. In programming, this number is called the index. 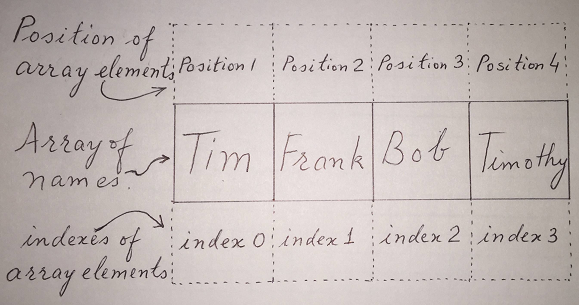 What if you didn’t know the index number? What would you do? Well, you’ll learn this soon. Hint: You’ll loop through, check values, and find the index.

Getting to your data

Now, let’s start the official lesson: How do I get to my data?

In order to get to your data, you need to know the index number to that specific entry. Let’s say you make a list of your friends’ names in the form of an array. You want to access “Bob” from that list.

Try these code examples out in the playground!

In the playground, it should print “fish”. 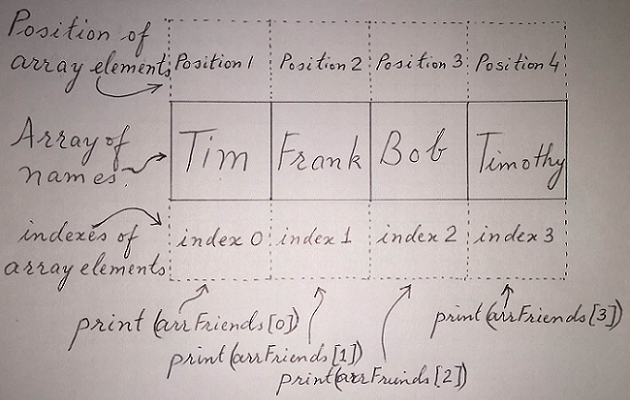 Figure 3 Array of pets, positions, indexes, and the print commands

Take a look at these arrays:

What do you think gets printed with these print() commands?

The first print command prints out 6093. Did you notice that this array contains integers, and not strings?

The second print command prints out all the values in the food array! Try it out!

The third print command gives you an error, because it’s trying to print the FIFTH value and there are only four.

You can create an array of integers. You need to use the keyword Int and leave off the quotes around the values!

Now, you’re going to store and change data in arrays with programming!

Let’s start off with changing one of the names of your friends. The existing array of friends is:

Ok, now what if you need to replace Maya with Tommy? How do we change that name in the array?

You know that the index starts with 0, not 1, right? The fourth name in the list has an index of 3!

You can do this:

❶   We want to see what is at index 3 to make sure it contains Maya.

❷  Here, we change the name stored at index 3 to Tommy.

❸  Now we print the name at index 3 again to see that it has been successfully changed to Tommy.

At line “#B”, we set the third index of the arrFriends array to Tommy like we change the value of any other variable.

In this playground exercise, you’ll make an array that lists some of the games you like. Then, in the next section, you’ll loop through it.

To start, open up Xcode and create a new playground.

Name this Playground “arrays_in_Swift”. Then, remove the first line and type the array code and five games, for example:

If you want to access the values of the array, you could type:

What do you do if you want to add another game to the array? In addition to editing values that are already in the array, you can also add more values. To do this, you use the “.append” function (method) on an array.

The array, after running this command, will contain this:

Now for the most interesting part of arrays: Looping through your arrays!

Let’s say you create an array, and you want the names of your friends in it, again. Here’s that array:

Now let’s say you wanted to print every single friend’s name in the array. How would you do it, if you didn’t want to list them all out by running print() five times, with the index changed each time? And imagine if the array had 100 values in it!

To do this, you can loop through the array, and print every single value in the array as you loop.

In order to do this, you’ll make use of what you know about loops and combine it with what you learned now.

“For in” loops are amazing for iterating or looping through arrays, right? You’re about to find out for yourself.

The syntax of looping through an array is:

Here’s what all of that means:

Table 1 Syntax definitions for the “for in” loop with arrays

BUT WAIT! I didn’t put the quotes and brackets around the “friendname” as “\(friendname)” in the print() statement, so it couldn’t possibly work! Or will it?

***EXTRA SPECIAL TIP***  You can print variables with print(), without having to ever put the quotes! It’s completely valid to say: print(i)! Try it yourself!

NOTE You can put any valid variable name in a “for” statement! Instead of having to use “friendname”, you could even use “i”, “x” or “myFriends” without the quotes.

You’ll see this output after running that code:

Notice that you don’t have to use five different variable names to store or print your friends’ names!

As you can see, loops help us when we’re dealing with lots of array elements, in an efficient way, instead of needing to use a bunch of variable names.

Now that you’ve seen how arrays work, it’s time to create an app.

This app lets the user enter ten different numbers. The app sorts them from small to large. 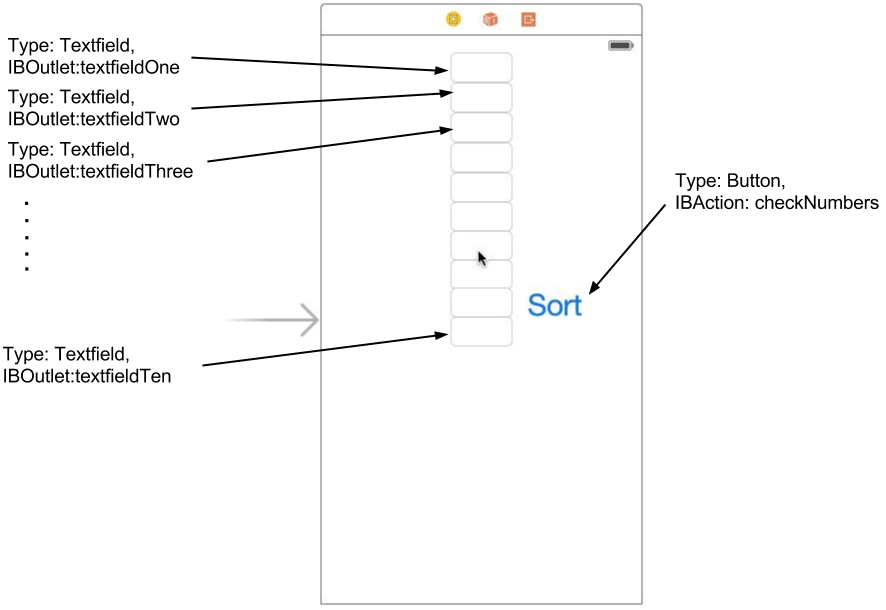 Great! Next, modify your code to look like this:

❶  These IBOutlets allow us to get and set the text of the 10 TextFields, so that we can handle the numbers that the user enters

❷  This IBAction will use the “Selection Sort” to sort the numbers, and put the sorted text back into the TextFields.

❸  Using “Int()” we are able to convert the text from the textfields (as Strings) to Integers.

❹   This is a “Selection Sort” Algorithm with For Loop statements.

❺  This is where we set the text of all the textfields, with the sorted numbers.

Explanation of the Code, SELECTION SORTING!

We used an algorithm called the “Selection Sort” algorithm.

Let me explain it to you.

We’re running two loops, one inside of the other. We have an outer loop using the variable “outerLoop”, and an inner loop using the variable “innerLoop”. The outer loop goes through all the numbers, except the last one, once. Every time the outer loop repeats the inner loop loops though the remaining numbers and brings the least numbers up to the top by repeatedly swapping the outer loop’s number with the smaller numbers below it. This repeats, with the help of “outerLoop”, up to the one less than the end of the array, and we get a sorted array in ascending order!

Go to the second dimension: Rows and Columns!

Now, I’ll be teaching you about the second dimension. This means that instead of only having rows, our array will have rows AND columns. You’ll get a “grid” or a “matrix”.

Let me show you a visual example of the arrays we’ll be creating:

As you can see, the declaration of the array changes to:

The difference, if you can’t make out, is that this declaration has two pairs of square brackets around the type, not one pair. You could have as many brackets as you like. The more brackets you put, the more dimensions the array has. Next, in order to access your name “Amy” at row 3, and column 2 from teamsArr you’ll code like:

NOTE Like the rest, the position for Amy is row index 2, and column index 1 because ranges always start with 0

Now you know what arrays are and how to use them.