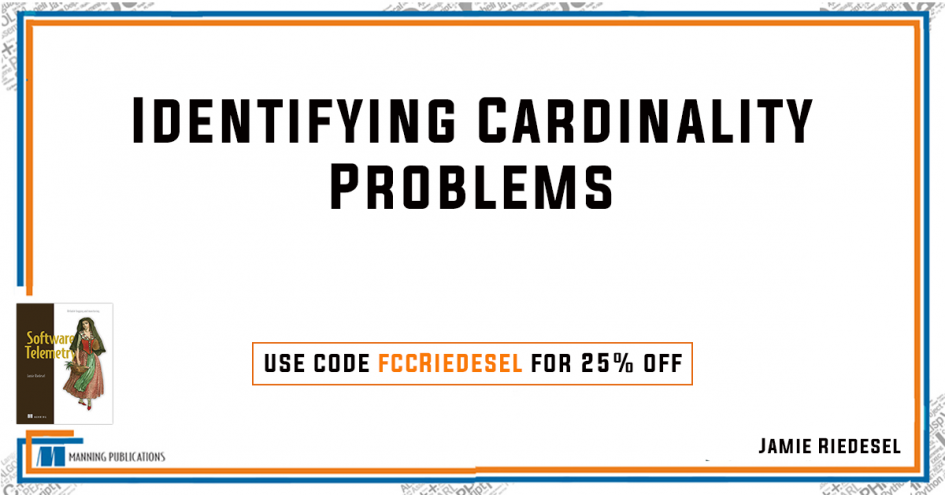 Take 40% off Software Telemetry by entering fccriedesel into the discount code box at checkout at manning.com.

We’ll go over two broad types of storage system, and the ways cardinality impacts each. Cardinality in time-series databases is covered first, followed by cardinality in logging databases. The third Pillar of Observability, traces, is currently dominated by Software-as-a-Service platforms. The dominant self-hosted platform is Jaeger, which sits on top of either Cassandra or Elasticsearch and inherits the cardinality problems of those platforms (which are covered here).

OpenTSDB has a strict cardinality limit per field of sixteen million unique values. Although this is generous, using a field to store highly unique information such as IP address or the container ID in a Kubernetes pod quickly runs your key out of space. You’ll notice this happening by not getting new values in your metrics.

The other area cardinality comes into play with OpenTSDB is in the queries themselves. Queries that require a lot of fields, or involve fields that have a lot of cardinality are slower than queries involving little cardinality. You can speed things up by using multiple region servers (a Hadoop concept) in your OpenTSDB cluster, which allows OpenTSDB to partition or shard data across the many region servers. When split up this way, queries are submitted to each region, processed in parallel, and then reassembled. Parallel processing makes the query much faster. Figure 1 demonstrates this process. 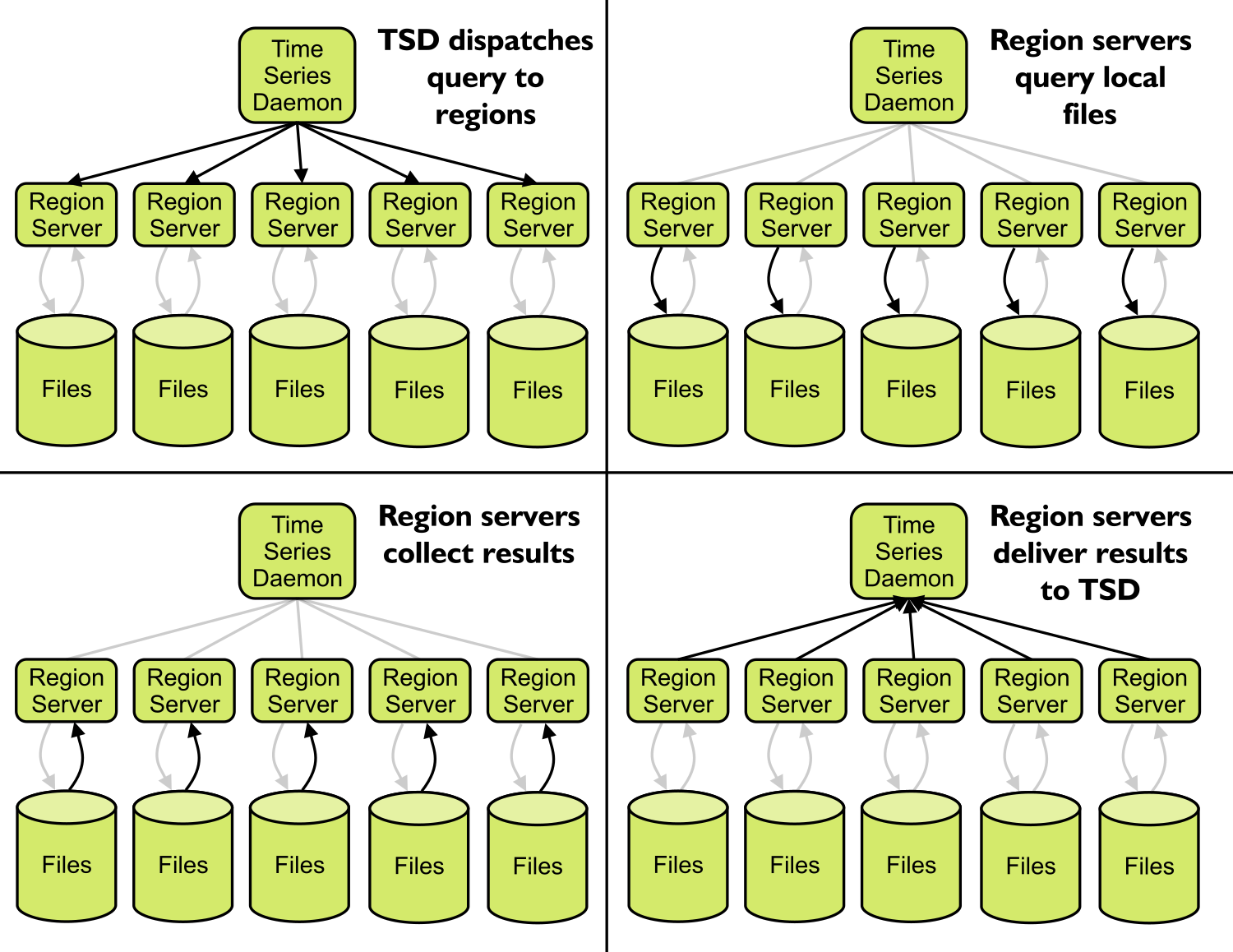 Figure 1 How OpenTSDB splits up queries for high cardinality data. The Time Series Daemon receives the query from the client and then redistributes it to the Region Servers. The Region Servers then query their local storage and deliver any local results to the TSD. The TSD then reassembles all the results to return to the client. A slow performing high cardinality query is made faster through parallel processing.

KairosDB doesn’t have any explicit cardinality limits, but how it operates provides some defacto limits to cardinality. Four main pieces of data for a metric are:

A critical thing to understand with KairosDB is that the key=value pairs aren’t indexed. Using them in a query slows your query down, and the more unique values in a specific key, the slower your query gets. To use an SQL example of what’s happening, let us look at how KairosDB returns results for a metric named pdf_pages and with the tag datacenter=euc1 set. The SQL-like first query KairosDB performs when processing a user-query is:

Which returns a list of all metrics with the name pdf_pages in it. KairosDB then walks through the entire result-set looking for tags fields that contain datacenter=euc1. The more unique values in the tags fields, the more data KairosDB can throw away before returning results, which in turn means queries cause a lot of storage I/O for few results. Figure 2 shows this process.

Figure 2 The two passes KairosDB takes when responding to a query using tags. The first pass uses Cassandra and its indexing, and it‘s pretty fast. The second pass goes over the result set one by one looking for rows with the right tags. For tags with high cardinality (high uniqueness) most of the result-set is discarded and few rows match. For tags with low cardinality a large percentage of the returned rows l match. The storage charge for the query is the same for high and low cardinality queries, but high cardinality queries require more I/O capacity to resolve.

If your KairosDB infrastructure is consuming a lot of storage I/O capacity and feels slow, you likely have a cardinality problem in your tags. In general, only use tags to indicate low cardinality data. Our example uses datacenter as tag, which has fewer than ten values for this example company. Keep in mind that the first phase of the query, done on Cassandra, has its own cardinality issues; too many metrics slows that query down as well. How much is too much? Keep an eye on your query performance, because this is the only way to tell.

Prometheus says in its documentation to not put too many metrics in it, and the limiting factor is memory on the Prometheus server. Right now (2021), a Prometheus server with two million time-series (metric name, times each key-value) needs 8GB of memory to ingest and process queries. If you find your Prometheus server is running out of memory, you likely have a cardinality problem.

InfluxDB (up to version 2.0) has an explicit cardinality limit that must be set, which applies per database. When this cardinality limit is reached, InfluxDB won’t accept metrics that attempt to increase cardinality. You’ll notice this limit has been reached by not seeing new data in the affected database. Setting the limit high works to a point, but when InfluxDB performs shard compaction (a shard is the metrics data for a regular length of time) the amount of memory this takes is directly related to cardinality in the database.

InfluxDB lets you declare multiple databases, which is one way to get around the cardinality problems. Keep in mind that shard-compaction needs to happen for each database, and when those events overlap quite significant memory can be required to complete. You can tell you have exceeded a database-server’s ability to support the InfluxDB databases when the InfluxDB process runs out of memory. On Linux systems, the OOMKiller terminates the InfluxDB process unless you’ve configured the kernel to avoid the process.

When it comes to Elasticsearch, there are two metrics to pay attention to for cardinality:

When Elasticsearch is used with time-based indexes — such as one index per day or week, which is common with Centralized Logging telemetry systems — you can easily track both of these metrics over time. Search performance generally scales with the size of the shards inside an index, which means you need to track that as well. Time-based indexes also let you see progress you’ve made in fixing problems.

MongoDB is another document-oriented database. Unlike Elasticsearch, which provides an index for every field, MongoDB relies on externally defined indexes. The implication of having to define your own indexes is that the data going into a given collection (similar to an index in Elasticsearch) all looks the same. This design makes MongoDB less flexible in the face of variable inputs, but gives you more direct control over search performance. As with relational databases, searching for things in unindexed fields kills search performance.

All is not lost, though. MongoDB supports creating a single index for every string-type field in the collection. This more closely matches the design of Elasticsearch in that all text searches is done through the index. Using this feature for centralized logging makes the index of the collection significantly larger than the collection itself. This isn’t always a bad thing, it certainly improves search performance, but it changes where you look for problems.

MongoDB supports sharding, splitting a collection up onto different database servers. This sort of splitting is a great way to allow more write capacity, and also has the impact of reducing the absolute size of your index and data files on each given shard-server. Similar to how OpenTSDB (see figure 1) and Elasticsearch handle shards, queries on a sharded collection benefit from parallelization.

That’s all for this article. If you want more, check out the book on Manning’s liveBook platform here.