Save 37% on Kafka Streams in Action. Just enter code streamkafka into the discount code box at checkout at manning.com.

Imagine you’re working with business analysts as BSE. The analysts are interested in your ability to quickly write applications in Kafka Streams to perform real-time data analysis. This interest puts you in sort of a bind.

You want to work with the analysts and write applications for their requests, but you have a busy workload, and the additional work makes it hard to keep up with everything. The analysts understand the added work they’re creating, but they can’t write code and they’re dependent on you for getting their analytics written.

The analysts are experts on working with relational databases and are quite comfortable with SQL queries. If there were a way to give the analysts a SQL layer over Kafka Streams, then everyone’s productivity would increase. Well, there isnow.

KSQL provides scalable, distributed stream processing including aggregations, joins, windowing, and more. Additionally, unlike SQL, which runs against a database or a batch processing system, the results of a KSQL query are continuous. Before we dive into writing streaming queries, let’s take a minute to review some fundamental concepts of KSQL.

An event stream is an unbounded stream of individual independent events, while the update or record stream is a stream of updates to previous records with the same key.

KSQL has a similar concept of querying from a Stream or a Table. Where the Stream is an infinite series of events or facts, but are immutable, but with a query on a Table the facts are updatable or can even be deleted.

Although some of the terminologies might be different, the concepts are pretty much the same, and if you’re comfortable with Kafka Streams, you’ll feel right at home with KSQL. For more details on these concepts, you can view the KSQL Terminology section at https://github.com/confluentinc/ksql/blob/master/docs/concepts.md#terminology.

KSQL uses Kafka Streams under the covers to build and fetch the results of the query. KSQL is made up of two components, the KSQL CLI and the KSQL server. Users of standard SQL tools such as MySql, Oracle, or even Hive will feel right at home with CLI when writing queries in KSQL. Best of all KSQL is open-source (Apache 2.0 licensed).

The CLI is also the client connecting to the KSQL Server. The KSQL server is responsible for processing the queries and retrieving data from Kafka, as well as writing results into Kafka.

KSQL runs in two modes, standalone, which is useful for prototyping, and development or in distributed mode, which is how you’d use KSQL when working in a more realistic sized data environment.

Let’s take a look at how KSQL works in both modes staring with local mode demonstrated in figure 1. 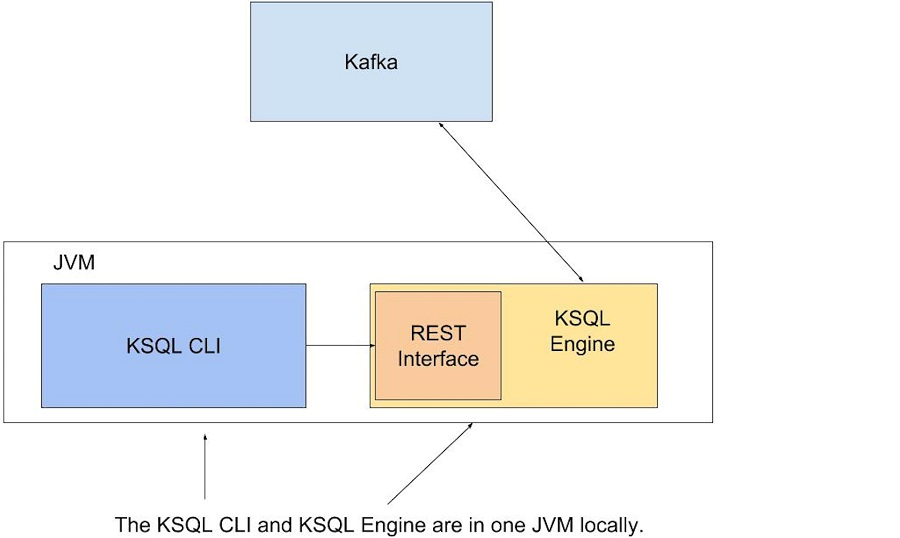 As you can see from the image above the KSQL CLI, REST server and the KSQL engine are all located on the same JVM, which is ideal when running on your laptop.

Now let’s take a look at how KSQL looks in the distributed mode. 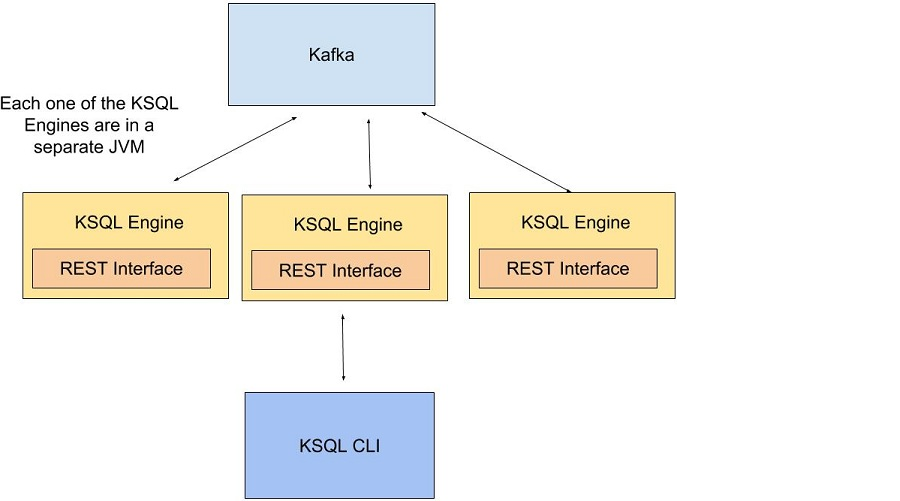 A key point to note here is the KSQL Servers are using Kafka Streams to execute the queries. This means that if you need more processing power you can stand up another KSQL server even during live operations (like we can spin up another Kafka Streams application). The opposite case works as well; if you’ve excess capacity, you can stop any number of KSQL servers, with the assumption that you’ll leave at least one server operational. Otherwise, your queries will stop running!

Now that you have an idea of how KSQL is set up, let’s cover how you get KSQL installed and running.

For installing KSQL, you’ll want to clone the KSQL repo with this command git clone [email protected]:confluentinc/ksql.git then cd into the ksql directory and execute this command mvn clean package, this builds the entire KSQL project. If you don’t have git installed or don’t want to build from source, you can download the release of the KSQL from https://github.com/confluentinc/ksql/releases/download/v0.4/ksql-0.4.tgz

After running the command above you should see something like this in your console: 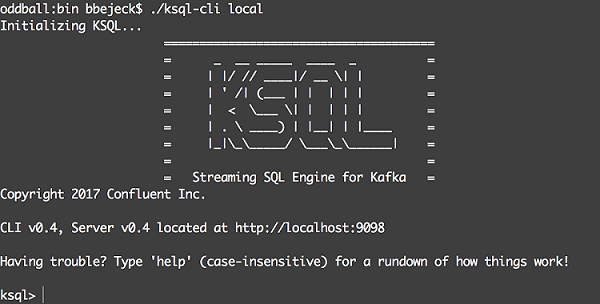 Getting back to your work at BSE, you’ve been approached by one of the analysts who is interested in one of the applications you’ve written before and would like to make some tweaks to the application. But now, instead of this request resulting in more work, you spin up a KSQL console and turn the analyst loose to reconstruct your application as an SQL statement!

The example you’re going to convert is the last windowed stream from the interactive queries example found in src/main/java/bbejeck/chapter_9/StockPerformanceInteractiveQueryApplication.java from lines 96-103. In that application, you’re tracking the number shares sold every ten seconds by company ticker symbol.

You already have the topic defined (the topic maps to a database table) and a model object StockTransaction where the fields on the object map to columns in a table. Even though the topic is defined, we need to register this information with KSQL by using a CREATE STREAM statement:

? Registering the fields of the StockTransaction object as columns

? Specifying the data format and the Kafka topic serving as the source of the stream (both required parameters)

With this one statement you’re creating a KSQL Stream instance that you can now issue queries against. In the WITH clause you’ll notice two required parameters VALUE_FORMAT telling KSQL the format of the data and the KAFKA_TOPIC parameter, telling KSQL where to pull the data from.

There two additional parameters you can use in the WITH clause when creating a stream. One’s TIMESTAMP which associates the message timestamp with a column in the KSQL Stream. Operations requiring a timestamp, such as windowing, use this column to process the record.

The other is KEY which associates the key of the message with a column on the defined stream. In our case the message key for the stock-transactions topic matches the symbol field in the JSON value, and we didn’t need to specify the key.

But had this not been the case then you’d have needed to map the key to named column because you’ll always need a key to perform grouping operations, which you’ll see when we execute the stream SQL in an upcoming section.

After you’ve created your new stream you can view all streams and verify KSQL created the new stream as expected with the following commands:

The results of issuing these commands gives you results as demonstrated in figure 4: 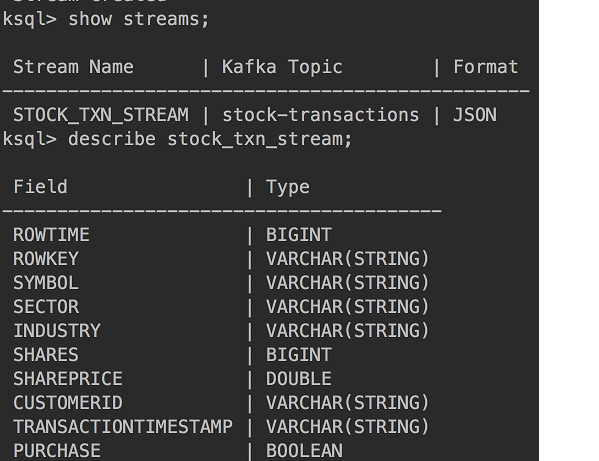 You’ll notice two extra columns ROWTIME and ROWKEY that KSQL has inserted. The ROWTIME column is the timestamp placed on the message (either from the producer or by the broker), and the ROWKEY is the key (if any) of the message. Now that you’ve created the stream, let’s run our query on this stream.

Once you run this query, you’ll results similar to what displayed here in figure 5:

The column on the left is the ticker symbol, and the number is the number of shares traded for that symbol over the last ten seconds. With this query, you’ve specified a tumbling window of ten seconds, but KSQL supports session and hopping windows as well. Now you’ve built a streaming application without writing any code at all; quite an achievement. For a comparison let’s take a look at the corresponding application written in the Kafka Streams API:

Even though the Kafka Streams API is concise, the equivalent you wrote in KSQL’s a one one-liner query.

If you’re interested in learning more about the book, check it out on liveBook here and see this Slideshare presentation.