Save 37% on Get Programming with F#. Just enter code fccabraham into the discount code box at checkout at manning.com.

Working with mutable data structures in the OO world follows a simple model – you create an object, and then modify its state through operations on that object. 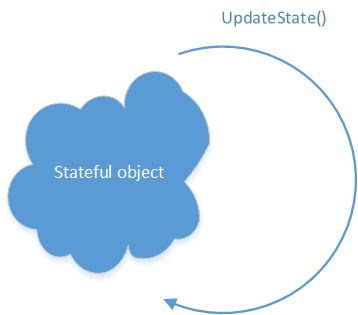 What’s tricky about this model is that it can be hard to reason about your code. Calling a method like UpdateState() above will generally have no return value; the result of calling the method is a side effect that takes place on the object.

Working like this, it’s worth noting a few things –

Let’s now compare that with working with immutable data structures.

In this mode of operation, we can’t mutate data. Instead, we create copies of the state with updates applied, and return that to the caller to work with; that state may be passed in to other calls that generate a new state yet again.

I often hear this question – isn’t it much slower to constantly make copies rather than modify a single object? The answer is: yes and no. Yes, it’s slower to copy an object graph than make an in-place update. Unless you’re in a tight loop, performing millions of mutations, the cost of doing it is neglible compared to opening a database connection. Plus, many languages (including F#) have specific data structures designed to work with immutable data in a highly performant manner.

Let’s now rewrite our code to use immutable data.

We’ve made a few key changes to our code. The most obvious is that we aren’t using a mutable variable for our state any longer, but a set of immutable values. We “thread” the state through each function call, storing the intermediate states in values, which are manually passed to the next function call. Working in this manner, we gain a few benefits immediately.

In this example, you’ll see that we’re manually storing intermediate state and explicitly passing that to the next function call. That’s not strictly necessary, as F# has language syntax to avoid having to do this explicitly.

Let’s try to make some changes to our drive code.

Other benefits of immutable data

A few other benefits that aren’t necessarily obvious from the above sample:

If you want to learn more about F#, check out the book on liveBook here and see this Slideshare presentation.