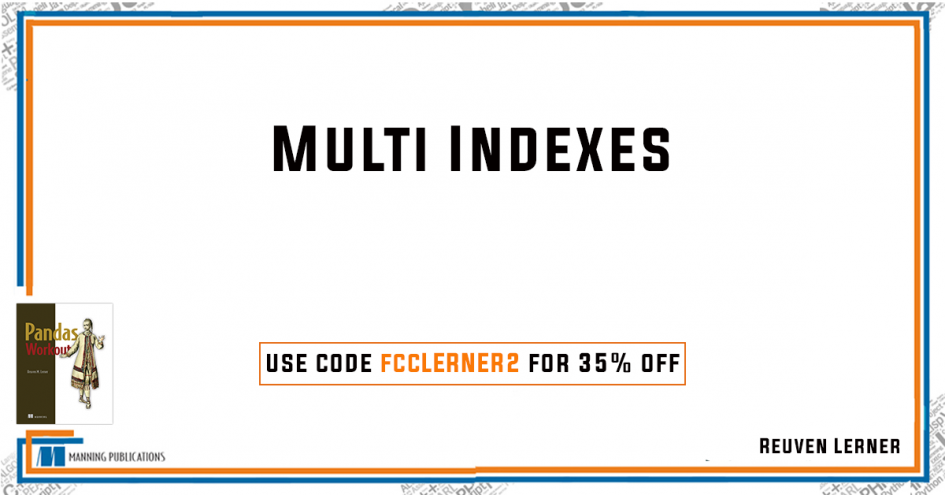 Take 35% off Pandas Workout by entering fcclerner2 into the discount code box at checkout at manning.com

Setting an index can make it easier for us to create queries about our data. But sometimes our data is hierarchical in nature. That’s where the pandas concept of a “multi-index” comes into play. With a multi-index, you can set the index not just to be a single column, but multiple columns. Imagine, for example, a data frame containing sales data: You might want to have sales broken down by year, and then further broken down by region. Once you use the phrase “further broken down by,” a multi-index is almost certainly a good idea.

In this article, we’ll look at a summary of scores from the SAT, a standardized university-admissions test widely used in the United States, as compared with the test taker’s university grade point average (also known as GPA, where 4.0 is the highest possible score) — although we’ll ignore the GPA for now. The CSV file (sat-scores.csv) has 99 columns and 577 rows, describing all 50 US states and three non-states (Puerto Rico, the Virgin Islands, and Washington, DC), from 2005 through 2015.

In this exercise, I want you to:

This article will show the power and flexibility of a multi-index. For starters, you need to load a CSV file and create a multi-index based on the “Year” and “State.Code” columns. We could do this in two stages, first reading the file, including the columns that we wanted, into a data frame, and then choosing two columns to serve as our index:

Notice that, as always, the result of set_index is a new data frame, one which we assign back to df.

However, you might remember that read_csv also has a index_col parameter. If we pass an argument to that parameter, then we can tell read_csv to do it all in one step — reading in the data frame, and setting the index to be the column that we request. However, it turns out that we can pass a list of columns as the argument to index_col, thus creating the multi-index as the data frame is collected. For example:

Now that we have loaded our data frame, we can start to explore our data and answer some questions.

First, I wanted to find out the mean math score for students in four states — New York, New Jersey, Massachusetts, and Illinois, in the year 2010. As usual, we’ll want to use loc to retrieve the data that’s of interest to us. But we’ll need to combine three things to create the right query:

Remember that when we’re retrieving from a multi-index, we need to put the parts together inside of a tuple. Moreover, we can indicate that we want more than one value by using a list. The result is:

The above query retrieves rows with a year of 2010, and coming from any of those four states. We only get the Total.Math column, on which we then calculate the mean.

The next question asks for a similar calculation, but on several years, as well as several states. Once again, that’s not an issue, if we think carefully about how to construct the query:

The query then becomes:

Notice how pandas figures out how to combine the parts of our multi-index, such that we get only the rows that match both parts.

❶ Set the index to be a combination of Year and State.code

❷ Retrieve rows with 2005, and the column Total.Test-takers, then sum those values

❸ Retrieve rows with 2010 and any of those four states, and the column Total.Math, then get the average

❹ Retrieve rows from 2012-2015 with those three states, and the column Total.Math, then get the average

When we talk about sorting data in pandas, we’re usually referring to sorting the data. For example, I might want to have the rows in my data frame sorted by price or by regional sales code.

If your data frame contains a multi-index, then the sorting will be done primarily along the first level, then along the second level, and so forth.

In addition to having some aesthetic benefits, sorting a data frame by index can make certain tasks easier, or even possible. For example, if you try to select a slice of rows, pandas insists that the index will be sorted, in order to avoid the ambiguity.

If your data frame is unsorted and has a multi-index, then performing some operations might result in a warning:

This is pandas trying to tell you that the combination of large size, multi-index, and an unsorted index are likely to cause you trouble. You can avoid the warning by sorting your data frame via its index.

If you want to check whether a data frame is sorted, you can check this attribute:

Note that this is not a method, but is rather a boolean value. Also note that some older documentation and blogs mentions the method is_lexsorted, which has been deprecated in recent versions of pandas; you should instead be using is_monotonic_increasing.