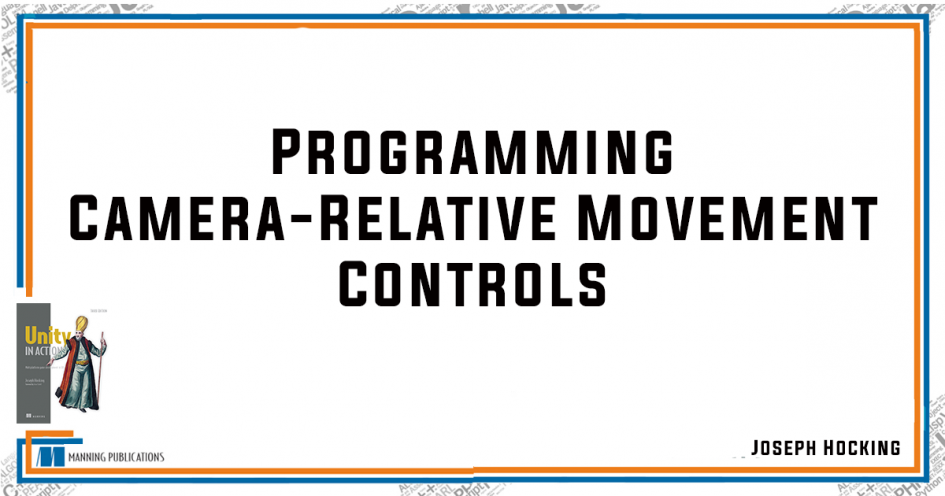 Take 35% off Unity in Action, Third Edition by entering code fcchocking3 into the discount code box at checkout at manning.com.

Once a character model is imported into Unity, it’s time to program controls for moving around the scene. Let’s program camera-relative controls that’ll move the character in various directions when arrow keys are pressed, as well as rotate the character to face those different directions.

The whole notion of “camera-relative” is a bit nonobvious but very crucial to understand. This is similar to the local versus global distinction mentioned in previous chapters: “left” points in different directions when you mean “left of the local object” or “left of the entire world.” In a similar way, when you “move the character to the left,” do you mean toward the character’s left, or the left-hand side of the screen?

Although games occasionally do it the other way, most third-person games make their controls camera-relative. When the player presses the left button, the character moves to the left of the screen, not the character’s left. Over time and through experiments with trying out different control schemes, game designers have figured out that players find the controls more intuitive and easier to understand when “left” means “left-hand side of the screen” (which, not coincidentally, is also the player’s left).

Implementing camera-relative controls involves two primary steps: first rotate the player character to face the direction of the controls, and then move the character forward. Let’s write the code for these two steps next.

First you’ll write code to make the character face in the direction of the arrow keys. Create a C# script called RelativeMovement, and write the code from listing 1. Drag that script onto the player character, and then link the camera to the target property of the script component (just as you linked the character to the target of the camera script). Now the character will face different directions when you press the controls, facing directions relative to the camera, or stand still when you’re not pressing any arrow keys (that is, when rotating using the mouse).

Listing 1. Rotating the character relative to the camera

#A This script needs a reference to the object to move relative to.

#B Start with vector (0, 0, 0) and add movement components progressively.

#C Only handle movement while arrow keys are pressed.

#E Add together the input in each direction to get the combined movement vector.

#F LookRotation() calculates a quaternion facing in that direction.

The code in this listing starts with a serialized variable for target, because this script needs a reference to the object it’ll move relative to. Then we get to the Update() function. The first line of the function declares a Vector3 value of 0, 0, 0. The remaining code will replace this vector if the player is pressing any buttons, but it’s important to have a default value in case there isn’t any input.

Next, check the input controls, just as you have in previous scripts. Here’s where X and Z values are set in the movement vector, for horizontal movement around the scene. Remember that Input.GetAxis() returns 0 if no button is pressed, and it varies between 1 and –1 when those keys are being pressed; putting that value in the movement vector sets the movement to the positive or negative direction of that axis (the X-axis is left-right, and the Z-axis is forward-backward).

Add the inputs in each direction to get the combined movement vector. The final line of code applies that movement direction to the character by converting the Vector3 into a Quaternion using Quaternion.LookRotation() and assigning that value. Try running the game now to see what happens!

Then replace the existing transform.rotation... line at the end of listing 1 with the following code:

Now, instead of snapping directly to the LookRotation() value, that value is used indirectly as the target direction to rotate toward. The Quaternion.Lerp() method smoothly rotates between the current and target rotations.

The term for smoothly changing between values is interpolate; you can interpolate between two of any kind of value, not just rotation values. Lerp is a quasi-acronym for “linear interpolation,” and Unity provides Lerp methods for vectors and float values, too (to interpolate positions, colors, or anything else). Quaternions also have a closely related alternative method for interpolation called Slerp (for spherical linear interpolation). For slower turns, Slerp rotations may look better than Lerp.

Currently, the character is rotating in place without moving; in the next section, you’ll add code for moving the character around.

Moving forward in that direction

In order to move the player around the scene, you need to add a character controller component to the player object. Select the player and then choose Component > Physics > Character Controller. In the Inspector, you should slightly reduce the controller’s radius to .4, but otherwise the default settings are all fine for this character model.

Here’s what you need to add in the RelativeMovement script.

#A The surrounding lines are context for placing the RequireComponent() method.

#B A pattern you’ve seen in previous chapters, used for getting access to other components.

#C The facing directions are magnitude 1, so multiply with the desired speed value.

#D Limit diagonal movement to the same speed as movement along an axis.

If you play the game now, you will see the character (stuck in a T-pose) moving around in the scene. Pretty much the entirety of this listing is code you’ve already seen, so I’ll review everything briefly.

First, there’s a RequireComponent() method at the top of the code. RequireComponent() will force Unity to make sure the GameObject has a component of the type passed into the command. This line is optional; you don’t have to require it, but without this component the script will have errors.

Next there’s a movement value declared, followed by getting this script a reference to the character controller. As you’ll recall from previous chapters, GetComponent() returns other components attached to the given object, and if the object to search on isn’t explicitly defined, then it’s assumed to be this.gameObject.GetComponent() (that is, the same object as this script).

Movement values are still assigned based on the input controls, but now you also account for the movement speed. Multiply all movement axes by the movement speed, and then use Vector3.ClampMagnitude() to limit the vector’s magnitude to the movement speed; the clamp is needed because, otherwise, diagonal movement would have a greater magnitude than movement directly along an axis (picture the sides and hypotenuse of a right triangle).

This handles all the horizontal movement; if you want to see more, like vertical movement, check out the book here.