Take 37% off Deep Learning for Vision Systems. Just enter fccelgendy into the discount code box at checkout at manning.com.

Check out part 1 for an intro to the computer vision pipeline.

In computer vision applications, we deal with image or video data. Let’s talk about grayscale and color images.

Images can be represented as a function of two variables, X and Y, which define a two dimensional area. Digital images are made of a grid of pixels. The Pixel is the raw building block of an image. Every image consists of a set of pixels in which their values represent the intensity of light that appears in a given place in our image. Let’s take a look at the motorcycle example again after applying the pixels grid to it. 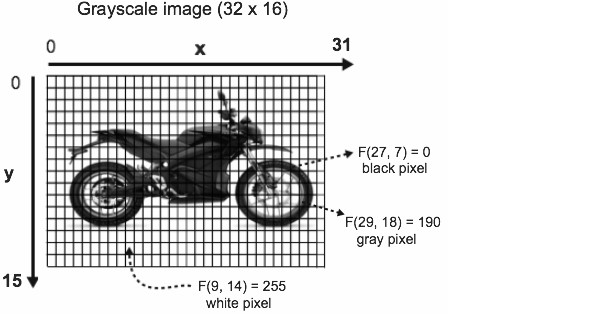 The image above has a size of 32 x 16. This means that the dimensions of the image are 32 pixels wide and 16 pixels tall. The X axis starts from 0 to 31 and Y axis from 0 to 16. Overall, the image has 32×16 = 512 pixels. In this grayscale image, each pixel contains a value that represents the intensity of light on this specific pixel. The pixel values vary from 0 to 255. Because the pixel value represent the intensity of light, then the value 0 represents dark pixels (black), 255 is bright (white) and the values in between represent the intensity on the grayscale.

You can see that the image coordinate system is similar to the Cartesian coordinate system: images are two dimensional and lie on the x-y plane. The origin (0, 0) is at the top left of the image. To represent a specific pixel we use the following notations: “F” as a function, “x,y” the location of the pixel on the x, y coordinates. For example, the pixel located in x=9 and y= 14 is white, this is represented by the following function: F(9, 14) = 255. Similarly, the pixel (27,7) that lies on the front wheel of the motorcycle is black, represented as F(27,7) = 0.

That was for grayscale images. How about color image?

Here’s the function representing color images in the RGB system:

Let’s take a look at the following image transformation examples:

When we look at an image, we see objects, landscape, colors, etc., but this isn’t the case with computers. Consider the picture below—your human brain can look at it and immediately know that it’s a picture of a motorcycle. To a computer the image looks like a 2D matrix of the pixels’ values which represent intensities across the color spectrum.

Without context, it’s a massive pile of data.

You can see that the image above is of size 24*24. This size shows width and height of an image; 24 pixels horizontally and 24 vertically. That means there are a total of 576 (24*24) pixels. If the image is the size of 700 * 500 then the dimensionality of the matrix is (700, 500). Where each pixel in the matrix represents the intensity of brightness in that pixel. 0 represents black and 255 represents white color. 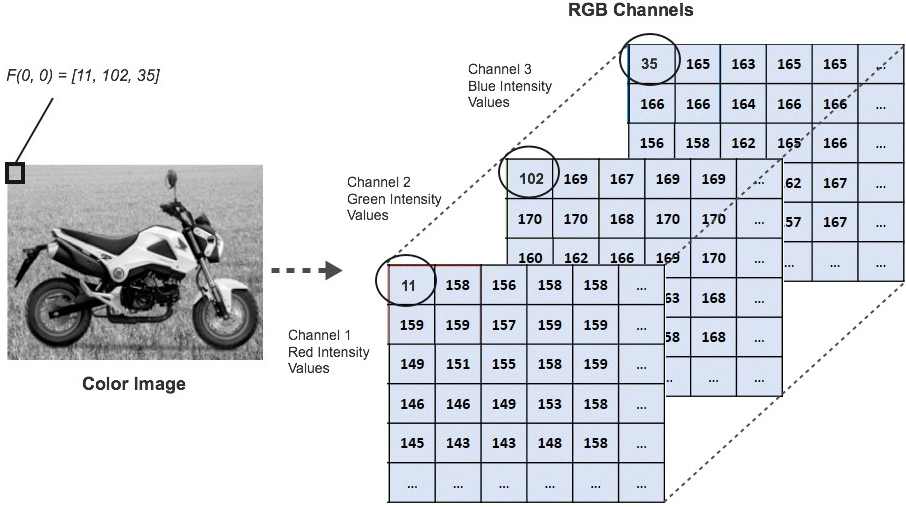 As you can see in above image, the color image is composed of three channels red, green and blue. Now the question is, how do computers see this image? Again, the answer is that they see the matrix, unlike grayscale images where we had only one channel. In this case, we’ll have three matrices stacked on top of each other, which is why it’s 3D matrix. Dimensionality of 700 * 700 color image is (700, 700, 3). Let’s say, the first matrix represents red channel, then each element of that matrix represents an intensity of red color in that pixel, likewise in green and blue. Each pixel in color image has three numbers (0 to 255) associated with it. These numbers represent intensity of red, green and blue color in that particular pixel.

If we take the pixel (0,0) as an example, we’ll see that it represents the top-left pixel of the image of green grass. When we view this pixel in the color images, it looks like this:

Take a look at the example below of some shades of the color green and their RGB values:

We’ve also seen how images can be treated as functions of space. This concept allows us to operate on images mathematically and change or extract information from them. Treating images as functions is the basis of many image processing techniques like converting color to grayscale or scaling an image. Each of these steps operate mathematical equations to transform an image pixel-by-pixel.

That’s all for now. Keep a look out for part 3. If you’re interested in learning more about the book, check it out on liveBook here and see this slide deck.