The What and Why of Domain-Specific Languages

The following article is a standalone excerpt from the opening chapter of my book “Domain-Specific Languages Made Easy” for Manning Publications. This book is going to be available spring 2021, but is already part of the Manning Early Access Program (MEAP). You can find its product page at: https://www.manning.com/books/domain-specific-languages-made-easy and take 40% off by entering fccboersma into the discount code box at checkout.

This article contains ideas, excerpts, and material from chapter 1: “What is a Domain-Specific Language?”

The book focuses on implementing Domain-Specific Languages (DSLs) for business domains. With such DSLs, domain expert can capture their extensive domain knowledge as DSL content using a Domain IDE. That knowledge is often “made executable” by generating code from it. This generated code implements the domain-specific part of a software system which we’ll call the Runtime. This approach is usually called model-driven software development, with the DSL content more commonly known as the model.

What is a DSL? 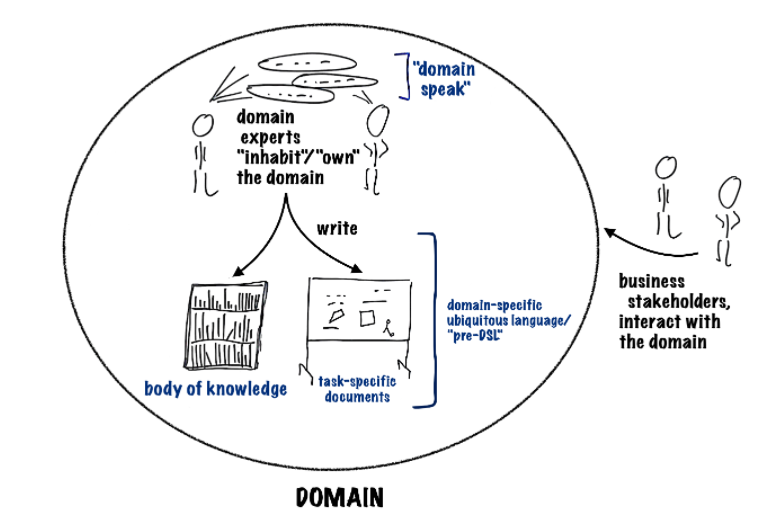 Figure 2. What is a domain?

As a first step, let’s see what the D stands for. A domain is a particular, focused area of knowledge. It comes with a group of domain experts “inhabiting” or “owning” the domain: people possessing, shaping, extending that area’s knowledge, and sharing it with business stakeholders and other interested parties. You could even argue that a domain often exists in the first place as such a group of domain experts, with that group defining the domain in an ad hoc manner. 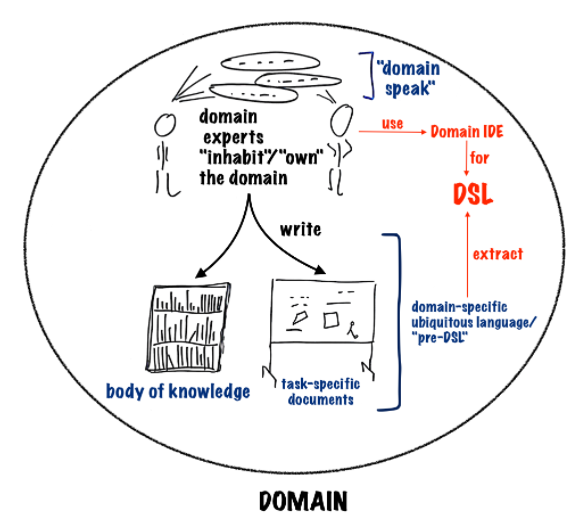 Figure 3. Extracting a DSL from the “pre-DSL”.

Figure 4. Mental model of the key aspects of a DSL.

This diagram lists the key aspects of any DSL, and the relations between them. At the center of the diagram is the actual DSL content, which is what the domain experts will see and manipulate. The “stuff” around it defines the DSL.

The most immediate and captivating part of a DSL is undoubtedly its notation: a system of writing that’s used to visually represent the DSL content so it can be understood by the domain experts. In other words: notation is the visual “stuff” that represents and codifies the meaning that’s being communicated. It serves as the interface between those domain experts’ eyeballs and the DSL content. For most intents and purposes, the notation is the DSL.

Figure 5. Mental model of only the notation aspect of a DSL.

Notation can be “anything”. Often, it is “boxology”: boxes containing text and/or sub-boxes, with lines or arrows between these. Sometimes, there are graphical elements that are not boxes so much, such as icons or other symbology, or tables.

DSL notation doesn’t need to be graphical: many DSLs are purely textual. It doesn’t need to look like code in a monospaced font, though: you can leverage good typesetting to improve readability, or even to convey specific meaning, and to make it look like a well-designed document.

Regardless of its type, a DSL’s notation is typically built up from of a small set of visual building blocks. For textual DSLs, these building blocks would be keywords, identifiers, strings, and numbers: various categories of text, each with their specific meaning, often typeset in a specific style to help convey that meaning. For graphical DSLs, these would be boxes, slots in those boxes, lines or arrows, labels next those arrows, etc. That the number of visual building blocks is small makes the language easier to “parse” visually, and therefore: to understand.

Notation is not thrown together happenstance: every DSL has a certain fixed structure. This structure makes it possible for the domain experts to understand the DSL consistently and unambiguously, but also for a computer to process it automatically.

Figure 6. Mental model of only the structure aspect of a DSL.

Structure is governed by the DSL’s concepts, and their properties. A concept is the blueprint for a fundamental construct in the DSL. It has a name, and a collection of properties which also have a name, as well as a type.

A property’s type determines what can be stored in the properties’ values. DSL content can be represented entirely using instances of concepts. Instances assign values that occur in the DSL content to properties as settings. It’s often quite easy to discern instances and their settings in the notated DSL content because of distinctive visual cues.

Instances of concepts don’t live in isolation, but work together through relations. Relations between instances are also represented by particular settings. Relations come in two kinds: 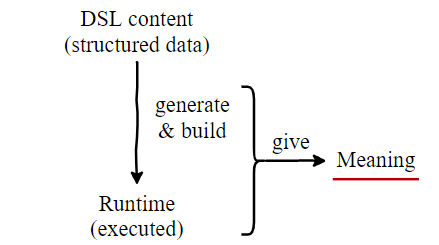 Figure 7. Mental model of only the meaning aspect of a DSL.

A DSL has to mean something. The “domain speak” and pre-DSL that the domain experts were already using before certainly carried a certain meaning. As stated before, this meaning might at that point still be a bit unprecise.

Usually, a software development project spends large amount of effort to make the domain experts’ specification of the Runtime precise enough to be able to implement. Instead, in a DSL-based approach the specification (in the form of DSL content) is itself precise enough to automatically generate a large part of the code of the Runtime from. We say that the DSL content is executably, because we can integrate the generated code into a complete software system, and run that. This executability is made possible by the DSL, that’s extracted from the pre-DSL, having been precisely-defined. The code generator then effectively gives the language a specific, and unambiguous meaning, in terms of how instances of concepts are mapped to code fragments in the Runtime.

Figure 8. Mental model of only the constraints aspect of a DSL.

Not everything you can write down in accordance with the DSL’s structure, makes sense. The DSL’s structure might allow a domain expert to specify adding a dollar amount to a date, but the DSL as a whole certainly should this. The way to do this is by augmenting the DSL’s structure with a set of constraints. A constraint runs queries against the DSL content to check for the presence of patterns that are considered to be nonsensical, or problematic. In case such a pattern is found, the Domain IDE warns the domain expert about it with a meaningful message, highlighting the offensive DSL content.

Why use a DSL-based approach for software development?

For better overview, I’ve divided the positive effects into a couple of broad categories.

An alternative way to phrase this is that it makes software development much more Agile for domain experts since they can add or change features of the Runtime, and test them on their own.

The same is probably not true for most software developers. Software developers are experts in specifying the How using general programming languages, but rarely in any specific domain. This means that they will have to learn the domain well enough that they can start translating the specification written by the domain experts into working code. That learning process takes time which translates to costs, and running times for the entire software development effort.

When (not) to use a DSL-based approach?

Does this mean you should always use a DSL? The simple answer is: NO. As always: “it depends…​” – and unfortunately not in the hard science way. The trick -or rather: knack- lies in recognizing the potential of a DSL in a given situation, and gauging whether it’d be a sensible idea.

In this book, we’ll be focusing on domains which I like to call business domains. A business domain is a domain that’s not really (computer-)technological in nature. Often, there are ulterior reasons to develop some software for the domain to support the activities undertaken in it, such as cost effectiveness, efficiency to gain a competitive edge, or regulatory compliance. The software itself (which we call the Runtime) is not the domain core business: it’s just something you need, preferably without getting in the way, and without costing too much.

Not enough on-site software developers to initiate a software development project, and follow it entirely through to the end. This means outsourcing at least part of the development effort, which means extra time, costs and risks. A DSL-based approach can mitigate this by being more time and cost effective.

Communicating the business knowledge in the domain (in any form) to software developers is difficult and error-prone. 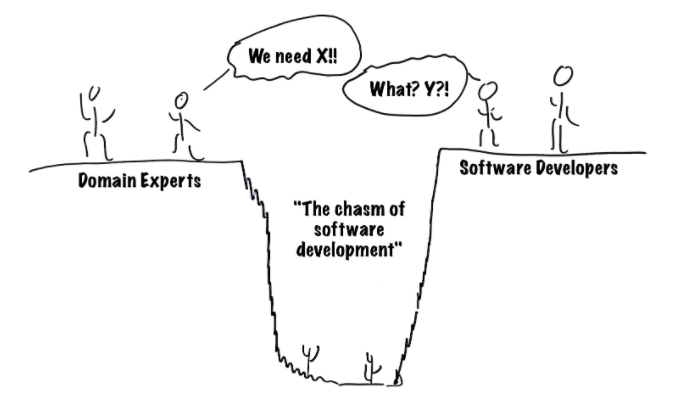 Figure 9. Side comic: the chasm of software development.

Even if the domain experts are able to write precise enough specifications in free-form documents -and this is a big if!-, the software developers still have to learn enough about the domain to be able to properly read and understand them. Often, software developers unintentionally end up being domain experts at the end of the development. A DSL-based approach can mitigate this in two ways:

None of this is quantifiable up-front, so we could do with some criteria to have a chance at making the right decisions. The table below lists the major helpful criteria. None of these are really quantitative, but the more boxes you can confidently tick, the likelier it is you could -or even: should- use a DSL-based approach.

There’s no such thing as a free lunch. Apart from the advantages of having a DSL, implementing, and using one comes with certain costs, and accompanying risks.

As always, these disadvantages must be weighed against the advantages.

That’s all for this article. If you want to learn more about the book, you can check it out on our liveBook platform here.