What Is a Microservices Architecture? 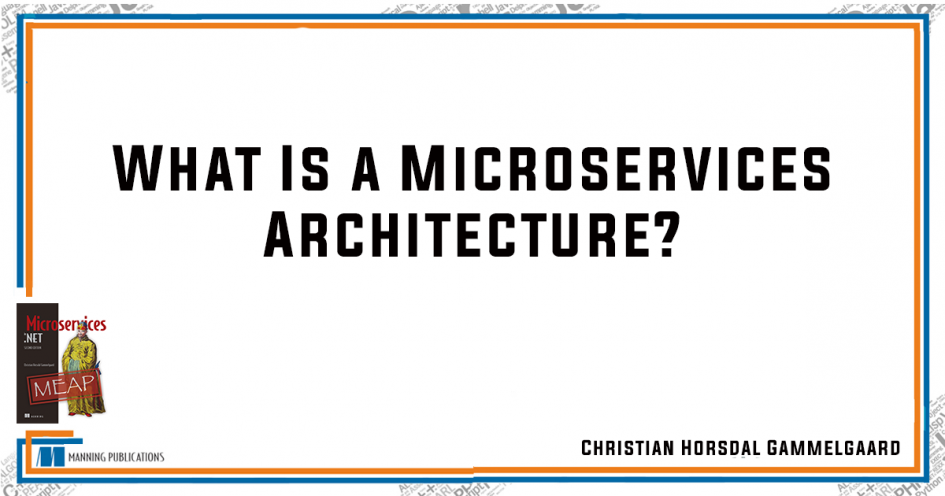 Take 40% off Microservices in .NET, 2nd Edition by entering horsdal3 into the discount code ox at checkout at manning.com.

The microservices architectural style has quickly been gaining in popularity for building and maintaining complex server-side software systems. And understandably so: microservices offer a number of potential benefits over both more traditional service-oriented approaches and monolithic architectures. Microservices, when done well, are malleable, scalable, and robust, and they allow for systems that do well on all four of the key metrics identified by Nicole Forsgren et al. in Accelerate and the DORA state of DevOps reports, namely:

This combination often proves elusive for complex software systems. Furthermore it is, as documented by Forsgren et al., a reliable predictor of software delivery performance.

In my book you will learn how to design and implement malleable, scalable and robust microservices which form systems that deliver on all four of the key metrics above.

Responsible for a single capability

A microservice is responsible for one and only one capability in the overall system. We can break this statement into two parts:

The Single Responsibility Principle has been stated in several ways. One traditional form is, “A class should have only one reason to change.” Although this way of putting it specifically mentions a class, the principle turns out to apply beyond the context of a class in an object-oriented language. With microservices, we apply the Single Responsibility Principle at the service level.

There are two types of capabilities in a microservice system:

Figure 1. Other microservices continue to run while the Shopping Cart microservice is being deployed.

To be able to deploy a single microservice while the rest of the system continues to function, the build process must be set up with the following in mind:

The fact that you want to deploy microservices individually affects the way they interact. Changes to a microservice’s interface usually must be backward compatible so other existing microservices can continue to collaborate with the new version the same way they did with the old. Furthermore, the way microservices interact must be robust in the sense that each microservice must expect other services to fail once in a while and must continue working as best it can. One microservice failing-for instance, due to downtime during deployment-must not result in other microservices failing, only in reduced functionality or slightly longer processing time.

Consists of one or more processes

Figure 2. Running more than one microservice within a process leads to high coupling between the two: They cannot be deployed individually and one might cause downtime in the other.

Speaking of complexity, why should a microservice consist of more than one process? You are, after all, trying to make each microservice as simple as possible to handle.

Let’s consider a Recommendation microservice. It implements and runs the algorithms that drive recommendations for your e-commerce site. It also has a database that stores the data needed to provide recommendations. The algorithms run in one process, and the database runs in another. Often, a microservice needs two or more processes so it can implement everything (such as data storage and background processing) it needs in order to provide a capability to the system.

Owns its own data store 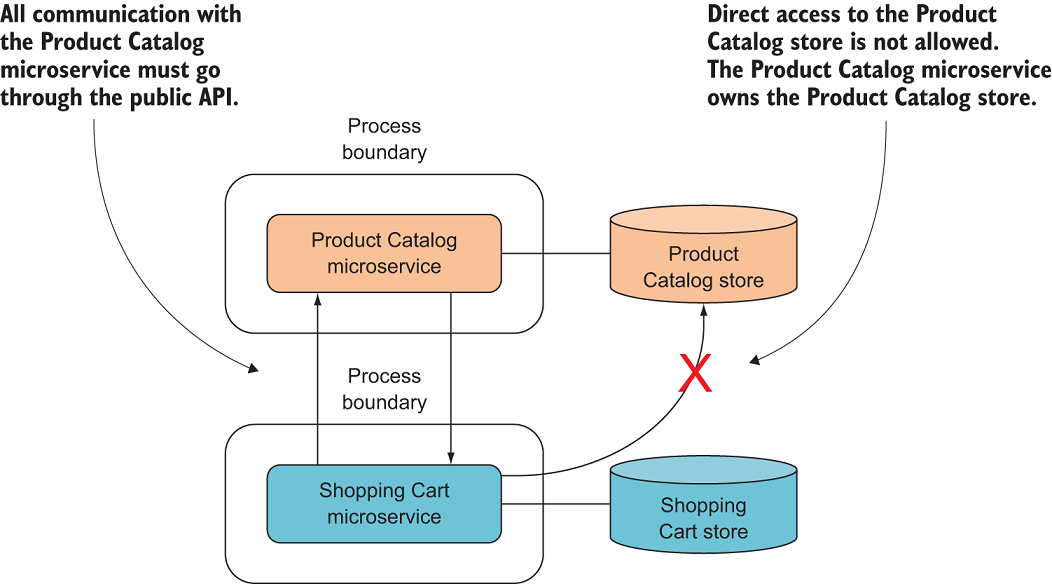 This approach allows each microservice to use whichever database is best suited for the job, which can also lead to benefits in terms of development time, performance, and scalability. The obvious downside is the need to administer, maintain, and work with more than one database, if that’s how you choose to architect your system. Databases tend to be complicated pieces of technology, and learning to use and run one reliably in production isn’t free. When choosing a database for a microservice, you need to consider this trade-off. But one benefit of a microservice owning its own data store is that you can swap out one database for another later.

Maintained by a small team

So far, I haven’t talked much about the size of a microservice, even though the micro part of the term indicates that microservices are small. I don’t think it makes sense to discuss the number of lines of code that a microservice should have, or the number of requirements, use cases, or function points it should implement. All that depends on the complexity of the capability provided by the microservice.

What does make sense, though, is considering the amount of work involved in maintaining a microservice. The following rule of thumb can guide you regarding the size of microservices: a small team of people-five, perhaps-should be able to maintain a few handfuls of microservices. Here, maintaining a microservice means dealing with all aspects of keeping it healthy and fit for purpose: developing new functionality, factoring out new microservices from ones that have grown too big, running it in production, monitoring it, testing it, fixing bugs, and everything else required. Depending on the volume of change in the microservices a few handfuls can mean anything 10 to 30 microservices or even more when the system, the tooling, and the automation are mature and effective.

Why would a team decide to rewrite a microservice? Perhaps the code is a big jumble and no longer easily maintainable. Perhaps it doesn’t perform well enough in production. Neither is a desirable situation, but changes in requirements over time can result in a codebase that it makes sense to replace rather than maintain. If the microservice is small enough to be rewritten within a reasonable time frame, it’s OK to end up with one of these situations from time to time. The team does the rewrite based on all the knowledge obtained from writing the existing implementation and keeping any new requirements in mind.