Save 37% on ASP.NET Core in Action. Just enter code lockaspdotnet into the discount code box at checkout at manning.com.

In ASP.NET Core, middleware are C# classes that can handle an HTTP request or response. Middleware can either:

For example, a piece of logging middleware might note down when a request arrived and then pass it on to another middleware. Meanwhile, an image resizing middleware component might spot an incoming request for an image with a specified size, generate the requested image, and send it back to the user without passing it on.

The most important piece of middleware in most ASP.NET Core applications is the MvcMiddleware. This normally generates your HTML pages and API responses. Like the image resizing middleware, it typically receives a request, generates a response, and then sends it back to the user, as shown in figure 1. 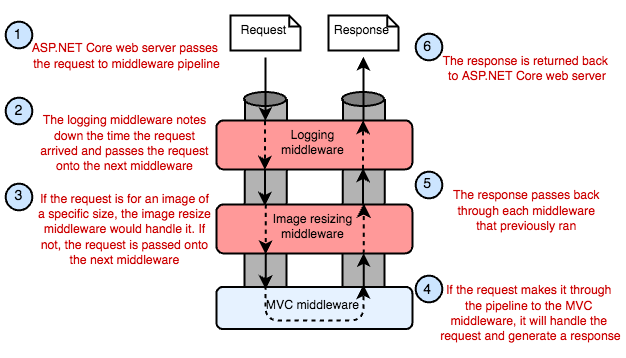 One of the most common use cases for middleware is for “crosscutting concerns” of your application. These aspects of your application need to occur with every request, regardless of the specific path in the request or the resource requested. These include things like:

In each of these examples, the middleware receives a request, modifies it, and then passes the request on to the next piece of middleware in the pipeline. Subsequent middleware could use the details added by the earlier middleware to handle the request. For example, in figure 2, the authentication middleware associates the request with a user. The authorization middleware uses this detail to verify whether the user has permission to make that specific request to the application. 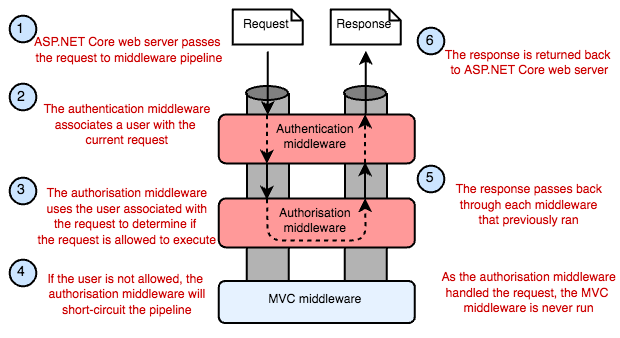 HttpContext sits behind the scenes. The ASP.NET Core web server constructs an HttpContext, which the ASP.NET Core application uses as a sort of “storage box” for a single request. Anything which is specific to this request and the subsequent response can be associated with and stored in it. This could include properties of the request, request-specific services, data which has been loaded, or errors which have occurred. The web server fills the initial HttpContext with details of the original HTTP request and other configuration details, and passes it on to the rest of the application.

All middleware has access to the HttpContext for a request. It can use this to determine, for example, if the request contained any user credentials, what page the request was attempting to access, and to fetch any posted data. It can then use these details to determine how to handle the request.

Once the application has finished processing the request, it’ll update the HttpContext with an appropriate response and return it back through the middleware pipeline to the web server. The ASP.NET Core web server converts the representation into a raw HTTP response and sends it back to the reverse proxy, which will forward it to the user’s browser.

In the previous version of ASP.NET, the concept of a middleware pipeline isn’t used. Instead, there are HTTP modules and HTTP handlers.

HTTP modules handle cross cutting concerns of applications, such as security, logging, or session management. They run in response to life-cycle events that a request progresses through when it’s received at the server. For example, there are events such as BeginRequest, AcquireRequestState, or PostAcquireRequestState.

This approach works, but it’s sometimes tricky to reason about which modules will run at which points. Implementing a module requires a relatively detailed understanding of the state of the request at each individual life-cycle event.

The middleware pipeline makes understanding your application far simpler. The pipeline is completely defined in code, specifying which components should run, and in which order.

This is all there is to the concept of middleware.