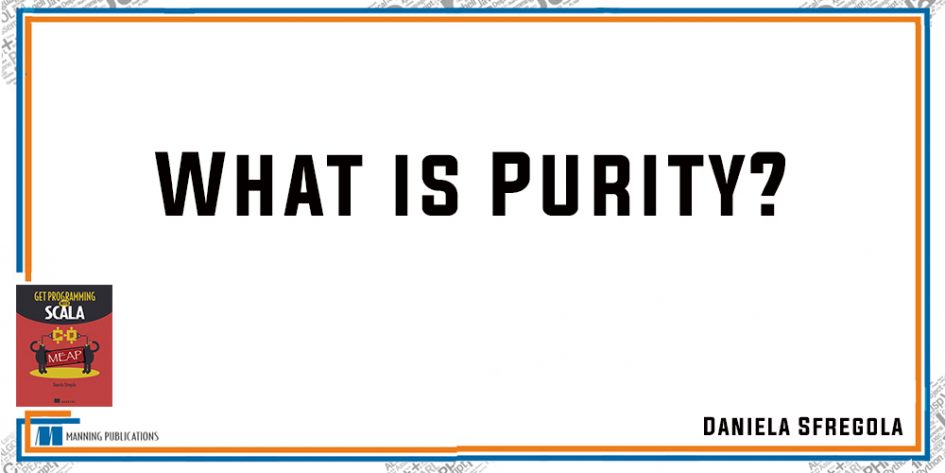 Take 37% off Get Programming with Scala by entering fccsfregola into the discount code box at checkout at manning.com.

In this article, you’ll learn about purity: a fundamental principle of functional programming. In particular, you’ll see that a pure function is total and it has no side effects: you’ll discover what these terms mean in detail. Distinguishing between pure and impure functions can help you identify and prevent bugs in your code. For example, consider the following scenario:

Suppose you are developing the software for a smart thermostat. Your business requirements dictate that your thermostat never reach temperatures below freezing (0°C or 32°F) because it could damage its mechanical parts. If this happens, your program should trigger an emergency recovery plan that changes the target temperature to a default value that the user can configure. You could translate this with the following function:

This function monitorTemperature behaves in different ways depending on the “purity” of its parameters. Consider the following function invocations:

Both function calls are valid, but the second one behaves unpredictably: even when the current temperature is above the freezing threshold, an unexpected (and confusing!) message appears in the console.

Consider this: Can you think of another example in which your function may suffer from some unexpected behavior because of the possibly impure values you have passed as parameters?

A definition of Purity

First, let’s discuss purity and how it differs from impurity. A pure function is total, and it has no side effects. Let’s see what each of these terms mean.

A function is total if it is well-defined for every input: it must terminate for every parameter value and return an instance that matches its return type.

The function plus2 is total because for every possible integer passed as its parameter, it terminates, and it returns an integer value as the result of its evaluation. The div function is not total because even if it always ends, it doesn’t always return a value of type Int: it throws an ArithmeticException its parameter n equal to zero. A thrown exception is an unexpected value not represented in its return type. Finally, the rec function is not total because it never terminates for any integer less or equal to zero.

QUICK CHECK 1
Which ones of the following functions are total? Why?

A side effect is an operation that has an observable interchange with elements outside its local scope: it affects (i.e. write side effect) or is affected by (i.e. read side effect) the state of your application by interacting with the outside world. A few examples are the following:

The function negate has no side effects: its only instruction acts on its parameter to produce a return value. The function Counter.incr contains a (write) side effect: every time you invoke the function, it changes the assignment for the variable counter, which is a code element that lives outside of its local scope. Counter.get also has a (read) side effect: given the same input, it returns a different integer depending on the variable counter’s current assignment. The function hello has a (write) side effect because its println instruction produces a message into the console, a component shared across your application that lives independently from its local scope.

QUICK CHECK 2
Which ones of the following functions have side effects? Why?

QUICK CHECK 3
A pure function is total and has no side effects. Consider the code snippets provided in Quick Check 1 and Quick Check 2: which ones of them are pure?

Differentiating between pure and impure functions

In the previous section, you discovered that a function is pure if total, and without side effects. You can describe this concept in a less formal way as follows: a function is pure if nothing else but its parameters determine its behavior, which its return type entirely describes (see figure 1).

Figure 1: A visual representation of the differences between pure and impure functions. Given an input, a pure function returns an output. On the other hand, an impure one also produces additional effects not represented in its return value.

A pure function guarantees that it always returns the same output given the same input parameters. In other words, you can replace its invocation with its return value and obtain the same outcome: This concept is called “referential transparency”, and it has several practical implications.

Suppose you have the following two functions, called pureF and impureF, which take a string as their parameter and return another string as the result of some computation:

This rule is a style suggestion rather than a law imposed by the compiler.

QUICK CHECK 4
Which ones of the following statements are true?

Let’s see if you got this!

TRY THIS:
Which ones of the following functions are pure? Which ones are impure?

QUICK CHECK 1
The answers are as follows:

QUICK CHECK 2
The answers are the following:

QUICK CHECK 3
In Quick Check 1, the functions opsA, selectException, anotherToString are pure. In Quick Check 2, there is only one pure function, which is powerOf2.

QUICK CHECK 4
The answers are as follows:

That’s all for this article. If you want to learn more about the book, you can check it out on Manning’s browser-based liveBook platform here.