Save 37% on Spring Microservices in Action. Just enter code springmicro into the discount code box at checkout at manning.com.

What are client-side resiliency patterns?

Client resiliency software patterns are focused on protecting a remote resource’s (another microservice call or database lookup) client from crashing when the remote resource is failing because it’s throwing errors or performing poorly. The goal of these patterns is to allow the client to “fail fast”, not consume valuable resources like database connections and thread pools, and prevent the problem of the remote service from spreading “upstream” to the client’s consumers. 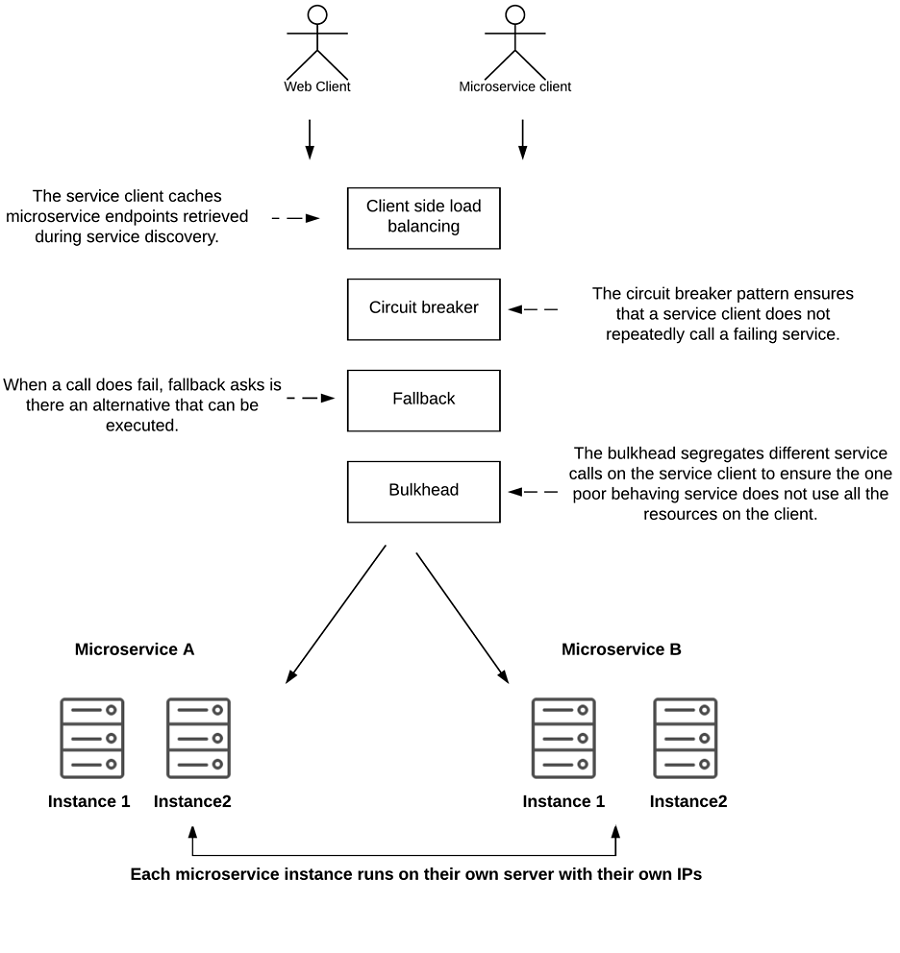 Client-side load balancing involves having the client look up all of a service’s individual instances from a service discovery agent (like Netflix Eureka) and then caching the physical location of those service instances. Whenever a service consumer needs to call that service instance, the client-side load balancer returns a location from the pool of service locations it’s maintaining.

This is exactly the behavior that Netflix’s Ribbon libraries provide “out of the box” with no extra configuration.

With the fallback pattern, when a remote service call fails, rather than generating an exception, the service consumer executes an alternative code path and tries to carry out an action through another means. This usually involves looking for data from another data source or queueing the user’s request for future processing. The user’s call isn’t shown an exception indicating a problem, but they may be notified that their request will be fulfilled later.

For instance, suppose you have an e-commerce site that monitors your user’s behavior and tries to give them recommendations of what else they could buy. Typically, you might call a microservice to run an analysis of the user’s past behavior and return a list of recommendations tailored to that specific user. If the preference service fails, your fallback might be to retrieve a more general list of preferences based off all user purchases. This data might come from a completely different service and data source.

The bulkhead pattern is based on a concept from shipbuilding. With a bulkhead design, a ship is a divided into completely-segregated and watertight compartments called bulkheads. The bulkhead keeps the water confined to the area of the ship where a puncture has occurred and prevents the entire ship from filling with water and sinking, because the ship is divided into watertight compartments (bulkheads), even if the hull is punctured.

For more information, check out the whole book on liveBook here and see this Slideshare presentation.